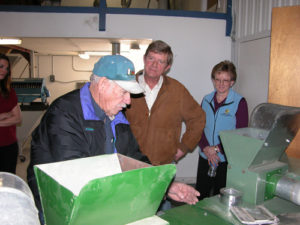 RBC I Rio Blanco County Commissioner Jeff Eskelson raised the issue of unequal distribution of state severance tax funds with U.S. Rep. Scott Tipton on Friday, during Tipton’s visit to the Upper Colorado Environmental Plant Center. Tipton also visited with the commissioners regarding regional policy issues.
Eskelson pointed out that Rio Blanco County produces about $50 million annually in severance tax funds from energy and mineral extraction while realizing a return of only $3 million from the state.
“These severance taxes were intended to come back to the counties where the money was generated,” Eskelson said. “We need more than the current 6 percent we are now getting, he said. “Even a small amount would mean a great deal to Rio Blanco County.”
The Colorado Department of Local Affairs (DOLA) distributes the revenue derived from energy and mineral extraction statewide. The funds come from state severance tax receipts and federal mineral lease non-bonus payments.
“We face a two-pronged problem,” Tipton said. “Denver feels that the rural areas don’t need the impact dollars like the large population centers and the state Legislature is largely filled by those from the large population centers. That leaves little power to the smaller counties.”
He said he understands the intent of the severance taxes was to help mitigate the impact of growth and environmental damages to the county infrastructure and schools brought on by the mining and extractions and that he would bring the issue to the Western Caucus to see if there is a way the legislatures in Western states can be urged to address the issue and work toward an amenable resolution.
Colorado Senate Bill 08-218 and House Bill 08-218, which passed the state Legislature in 2008, made significant changes to the method and process for distributing the funds.
According to DOLA, 50 percent of state severance tax dollars are earmarked with 30 percent going to direct distribution and 70 percent for grants and loans.
Forty percent of the funds are the DOLA portion of federal mineral leases of non-bonus payments to the state with those funds split 50-50 between direct distribution and grants.
The direct distribution goes into the county and the sub-county pools, a DOLA information sheet states. The county pool is based on statewide share of the following factors: Colorado Employee Residence Reports (CERR), mining and well permits and mineral production.
The sub-county pool is based on a county/municipal split based on CERR, population and road miles.
Another 1.7 percent of the overall funds goes to a separate distribution of federal mineral lease funds to state school districts. Again, these funds are based on a county pool and a sub county pool. The county pool is based on CERR and federal mineral lease funds generated; the sub county pool is based on the most recent student count.
Those funds are the annual distribution of severance tax funds to Colorado’s school districts.
“We are likely to get some push back from the state because it does the distribution and doesn’t always have sympathy for the more rural areas,” Tipton said.
“This is an issue to look into,” he said. “There are some good fellow members in the House who face this same problem with the fair distribution of the funds in their states. We’ll see if there isn’t something that can be done in Washington.
“Everyone also needs to understand that a very large portion of the land in Western states is federally owned and that there is little tax base for the counties,” Tipton said. “Small-population rural counties have the same problem as the larger counties but they don’t have the population base or tax base to raise the funds needed.”

Listen to this post RBC I U.S. Rep. Tipton (R-CO) reported recently that a radical litigation group is attempting to manipulate the marketplace and drive up electricity costs for rural Colorado families.

Listen to this post RBC I Both school districts in Rio Blanco County will benefit from a “one-year only” grant given by the county commissioners at their June 13 meeting. It was also the first […]

Listen to this post DENVER I As part of a landmark settlement agreement announced in November, the Bureau of Land Management last week canceled 17 of the 19 leases on top of the Roan Plateau […]

To market we will go …