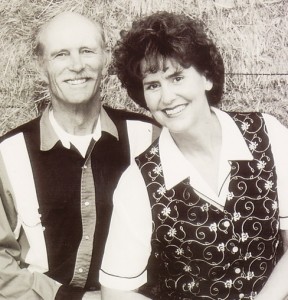 RANGELY I Frank and Diane Sizemore came from very different parts of the world and grew up doing entirely different types of work, but the two have helped support Rangely students for more than 25 years.
Frank Sizemore and his sister Diane (Mobley) were born in Hayden, Colo. Their family lived in Wilson Creek at the time. In 1947, when Frank was just six months old, the family moved to Rangely. Frank’s dad was Roscoe Sizemore and his uncle was Roy Sizemore. They worked in the oil field and Roscoe worked at R & R oil service for 30 years. Frank learned the trade and worked in the oil and gas industry as well. He owned Sizemore Oilfield Service for approximately 15 years. He helped install 4,000 horsepower electric motors.
Frank’s maternal grandfather Simion Peavy was the first fire chief in Meeker. His mother helped pay for the first fire truck the town had. He worked as a city cop, sold cars, built log houses and cabins and delivered mail via stage. He cut stones to build the old swimming pool and a hotel in Glenwood Springs and the courthouse in Meeker, whatever it took to make ends meet. If he didn’t know the skill, he bought a book and learned it. It was with that sort of tenacity Peavy sent every one of his six children to college.
When Frank was growing up, he spent summers helping his paternal grandparents, Oscar and Lula Sizemore, at Sizemore Resorts. They packed hunters into the lower Marvine Lakes for several years. Out of 20 cousins, only two were boys besides Frank. This made for a lot of work getting horses ready and camps packed.
For many years, Frank played in a Rangely band with Wayne Joslin, Bill Brinton and Bob Coy called the “Whirlwind,” then with Norm Cooper, Layne Parker and Wayne Justice in a group called the “Westerners.”
Over the years, he played with Charlie Pride at the state fair, Mary Taylor from “Hee Haw” also at the state fair and in Meeker at The Stagecoach west of town with local talent like Connie Theos and others. Frank has two children, Lance and Lorie; one granddaughter, and three great-grandsons.
Diane has been retired for nearly a year from the Rangely School District. She worked for the school for 25 years, keeping the building immaculate, volunteering to help with endless events and leading cheers for the students.
“She bleeds GREEN,” one former co-worker said of her school spirit. “The kids are the ones that really matter and I would do anything for them.”
Her husband said, “If nobody is cheering, she is the one that will lead the way.”
In her 25 years of service, she has volunteered to announce track meets and parades, chaperone dances, run concessions and help Mr. Skelton with any athletic event or task that needed assistance. She was the student council sponsor and has volunteered to help with that again for the middle school.
“We need to give kids options and things to do.” This is one of the key reasons she takes such pride in taking care of the facilities as well as volunteering for endless activities to help kids in her community. Diane has served as president of the board of directors at Giant Step for 12 years. She has been instrumental in acquiring grants and been substantial in the success of the programs. She is very involved in the community and certainly stays atop the local news with an intelligent, thoughtful and caring response to many current events.
When asked what they enjoy most about Rangely, the Sizemores agree, “The safety and camaraderie of a small town.” Diane said, “I can take a walk at three in the morning and not worry, it is like a large family.” The two enjoy the outdoors, rock crawling, hiking and fishing. They have enjoyed the opportunity to fish in Alaska and snorkel in Hawaii. They enjoy Jackson Hole and sincerely appreciate the history and roots at Pearl Harbor. The two appreciate the history and experience traveling has given them. They love seeing other places but truly love Rangely for all it is. The two have been a part of Rangely in two very different ways, but certainly the support the Rangely students have received from the Sizemores over the years is amazing. The sweatsuit Diane got from the students sums it up well. It says “No. 1 Panther fan.”

Listen to this post Dozens of friends and family with decorated vehicles participated in a drive-by 50th birthday celebration for Annette Webber on Dec. 20 at the Western Rio Blanco Rec and Park District. Webber’s […]

Listen to this post RANGELY | The Epsilon Chi Sorority of Epsilon Sigma Alpha (ESA) will once again hold its annual holiday bazaar Sunday, Nov. 13 at Parkview Elementary School from noon until 5 p.m.

Listen to this post RANGELY | Humble Hands massage therapy at 743 E. Main St. in Rangely will be hosting an open house Friday, March 10 from 11 a.m.-2 p.m. for any community members interested […]