MEEKER — Gary Coulter’s father wanted him to be a cattleman. Instead, he became an airman. 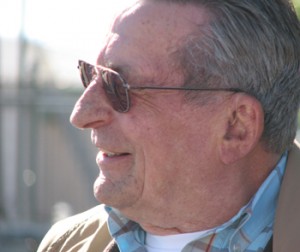 And he’s made it his life’s work.
For the past 50 years, Coulter, who turns 75 today, has been managing operations at the Meeker Airport, through an agreement with Rio Blanco County.
On Saturday, Coulter was recognized for his five decades of service. The day-long celebration included a fly-in and pancake breakfast, served by the Masonic Lodge; a three-plane flyover by pilots out of Grand Junction; a presentation by County Commissioner Kai Turner; a pig roast, prepared by Gerald Morris; and a surprise party attended by about 100 people.
“So many of his friends came from way far away to be here,” said Samantha Lopez, daughter of Gary and Relda Coulter, who helped organize the 50th anniversary celebration. “They just kept showing up. It was a great turnout. I think mom and dad, they were just tickled.”
Coulter Aviation is a family operation.

“We do it all, maintenance, charter, spraying, all of it,” son Lanny Coulter said. “It’s just a full-blown family deal.”
Gary started the business, and Lanny has followed in his footsteps, taking over many of the day-to-day duties. Daughter Samantha and her family live on the airport grounds and she serves as Rio Blanco County’s project coordinator for the airports in Meeker and Rangely.
Gary has 25,000 flying hours, and Lanny has about 16,000 air hours.
“It’s the only thing I’ve ever known,” said Lanny, who handles the charter flying and maintenance work at the airport. “I just kind of grew up doing it. How many guys get to grow up working day in and day out with their dad, and not hating each others’ guts? We have our words from time to time, but he taught me everything I know. I can’t imagine anybody any more lucky than I am for having that experience.”
Gary’s wife, Relda, has been involved in the business, too, doing whatever needs to be done, whether it’s keeping the books, answering phones or landscaping the grounds, while at the same time raising a family. Another daughter, Jeri, lives in Grand Junction and was on hand for Saturday’s celebration. And another son Alan lives in Moses Lake, Wash., but was unable to attend.
“Basically, I’ve been livin’ right here for 50 years,” Gary said. “I raised my family here.”
Besides the four children, the Coulters have nine grandchildren and two great-grandchildren.
“All of our kids and grandkids have grown up around it, except Alan, who grew up in the Northwest and raised his family there,” Relda said.
“It wasn’t strange (growing up around the airport),” daughter Samantha said. “Because that’s all I knew.”
If Gary’s father had had his way, though, he would have been herding cattle instead of flying airplanes.
“He was an avid cowboy,” Gary said of his dad. “He homesteaded that ground between here and Rifle, called Coulter Mesa. He said, ‘You should buy some cows.’ He just kept saying, ‘Airplanes aren’t here to stay.’”
Gary was 15 when he flew an airplane for the first time.
“I took a flight with the Civil Air Patrol,” he said. “They had an airplane, and they started giving me lessons. But I could only get one, two or three lessons every three or four months, because the instructor drank a lot. The only time he could fly was on Sunday morning, and he didn’t like to get out of bed.”
Gary had been fascinated with airplanes from an early age.
“I was always building airplanes,” he said. “I grew up on a ranch, and we had a guy come in and spray our alfalfa. When I saw him do that, I knew that was my calling. That was what I wanted to do.”
Gary took his first solo flight in 1953.
“I bought an airplane from a local guy, Si Berthelson, down on Piceance Creek,” Gary said. “I borrowed the money from my uncle, because my dad didn’t believe in airplanes.”
An airplane even played a role in Gary meeting his future wife for the first time. Relda’s parents operated a supper club in Meeker.
“She gave me $20 to fly her to Denver, but then she lost the $20,” Gary joked.
For the past 50 years, managing the airport has been an around-the-clock business for Gary and his family.
“It’s a seven-day, 24-hour business,” Gary said. “We can’t all be gone, especially in the winter, because we have to keep the runway open. That’s our duty with the county, to keep the airport open and maintain it. The only way to do that is to live here.”
Coulter Aviation manages the airport for the county, but the buildings — except for the office, which is where Gary and Relda live — belong to the business.
“Everything you see here is ours,” Gary said. “The county owns the land, but we built the hangars and so on.”
In presenting Gary with a plaque recognizing him for 50 years of service, County Commissioner Turner thanked him for his dedication to the airport.
“I’m not sure most people realize what that entails — 24/7 for 50 years,” Turner said. “You’ve provided a great service to the community. On behalf of the Board of County Commissioners, we wanted to give you this plaque for 50 years of service. It seems insignificant compared to what you’ve done.”
As part of Saturday’s 50th anniversary recognition, the Coulters’ daughter Samantha read a letter of appreciation from the Colorado Department of Transportation’s Aeronautics Division and made a plaque presentation.
“We are very grateful for your many years of service to the airport and to aviation in Colorado,” Samantha read. “To put your amazing accomplishment in perspective, consider the fact when you started at the Meeker Airport, the Division of Aeronautics did not even exist.”
Contrary to what his father said, it turns out airplanes were here to stay. And so was Gary.
Once he signed on to manage the airport for the county, in the spring of 1959, he never left.
“It’s been interesting for me, all these years,” said Gary, who has been flying for almost 60 years. “When we took over the airport, the county wanted us to keep the airport open 24 hours a day, to run a charter business, to sell fuel and to do maintenance on airplanes. To provide a service to the community, which is what they wanted.
“And we’re still doing it.”

MEEKER I The second day back from Christmas vacation, the Meeker girls’ basketball team defeated the 3A Roaring Fork Rams at home before traveling to Walden for its first league game of the season, which […]