MEEKER — The Cowboys had the offense, including an inside-the-park home run, and they had the pitching, giving up just one hit out of the infield. 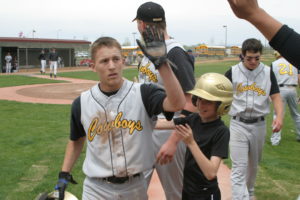 But they didn’t have the defense.
“We’ve been battling that all year,” said Coach Joel Matrisciano after Meeker committed five errors in a 7-6 loss last Friday against Dolores in the District 2 tournament in Grand Junction. “We moved some guys around, thinking it would fix some of that, but it sort of blew up on us.”
The loss ended the Cowboys’ season at 8-11. They finished second in the league behind Paonia, which won the district tournament.

“Yeah, we’re obviously disappointed, because we had higher expectations than we achieved, I did anyway,” Matrisciano said. “I think the boys maybe didn’t realize how good they could be.”
This was Meeker’s first trip to the district tournament since 1995, Matrisciano said.
And it may have showed.
“I think they were a little nervous, a little overwhelmed,” Matrisciano said.
The coach’s son Tyler went the distance for the Cowboys, allowing six hits and seven runs, but only two were earned. It was his only loss of the season, as he finished with a 4-1 pitching mark.
“Honestly, he deserved better than he got,” Joel Matrisciano said. “They scored seven runs on one hit out of the infield. We just didn’t play as well defensively as we should have. That’s what got us in trouble.”
At the same time, the Cowboys struggled to score runs, though they scored two in the top of the seventh, to pull within one.
“We left 10 guys on base,” the Meeker coach said. “That’s another thing that hurt us. We left the bases loaded in the first and only scored one run, and there was another inning when we left the bases loaded. We had guys in scoring position, and didn’t get them in.”
An offensive highlight for the Cowboys was an inside-the-park home run by sophomore Cole Steiner.
Playing in their last game for the Cowboys were seniors Jared Doll, Clinton Kilduff, Tyler Matrisciano, Bubba Mazzola, Austin Seely and Trenton Schindler.
“They’ve been together since they were 8-, 9-, 10-year-olds,” Joel Matrisciano said. “It will be tough to see them go.”

Meeker’s Cole Rogers and Jake Shelton are pictured with the championship trophy the two helped their team win Saturday in a Triple Crown tournament in Longmont.

10U baseball team rebounds to 2-2 record

MEEKER — Meeker’s 10-and-under baseball team has played four games so far this season and are currently 2-2. Meeker beat Parachute in the season opener, then lost a doubleheader to Rangely before beating New Castle.