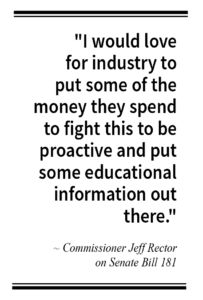 Commission Chair Jeff Rector said he testified on Senate Bill 181 again last week in another 10 hour session. Proponents of the energy industry, and counties dependent on oil and gas tax revenue, believe the bill—as written—will effectively shut down energy development in the state.

“There was some good testimony on both sides,” Rector said. “There’s some good stuff in it that’s applicable to the Front Range, with the stuff they’re dealing with with wells close to houses. but we still don’t know what the final draft is. Hopefully we got some verbiage changed in it,” he said, later adding, “It’s a tough place at the capitol right now.”

Rector also said the four largest producers have rewritten their 2019 budgets and pulled $350 million out of Western Colorado.

“In 2018 state gave back $16 million in severance taxes to counties; the total FML [federal mineral lease] received was $86.9 million. They gave back $18.7 million, about 21 percent, to all counties, municipalities, we receive 1.5 percent of that,” said RBC Finance Director Janae Stansworth.

“There’s a lot of people in western Colorado that believe the same way as people on the Front Range. It was probably a 60-40 split,” Rector said. “I would love for industry to put some of the money they spend to fight this to be proactive and put some educational information out there.”

Commissioner Si Woodruff said the same was true at a daylong program about reintroduction of wolves to Colorado he attended in Rifle last week. The class was presented by Defenders of Wildlife, a national non-profit whose stated mission “is dedicated to the protection of all native animals and plants in their natural communities.”

Woodruff said presenters included a “pool rider” for 31 Alberta, Canada, cattle ranches, a rancher near Yellowstone, and a former wildlife services trapper. The ranch representatives said when they quit fighting the wolves and “taught the cows” to stay in the herd and not be scattered, livestock losses to wolves dropped to less than 1/2 percent. The former trapper said hunter success rates in the states where he worked are still just as high, although he didn’t say the number of hunters is still at the same level.

One of the presentations came from the Colorado River District about “demand management,” a potential plan to make sure Lake Powell and Lake Mead have enough water to “keep the turbines running,” in the event of severe drought conditions, Moyer explained. The proposal differs from a “call” on water rights in that it would be voluntary, compensated and acknowledged.

In other water-related news, Moyer explained aspects of the Waters of the U.S. Act, and said Colorado’s new Attorney General, Phil Weiser, has withdrawn the state from a lawsuit that provided a stay of “Draconian” regulations while specific definitions are developed. The original act gave the Environmental Protection Agency and Army Corps of Engineers jurisdiction over “navigable waters” in the U.S., without clearly defining “navigable.”

In work sessions Monday in Meeker the board:

“Planning in a general term is all land use,” Gates said. “Within our community I could be helpful in the meantime to work with other departments.”

– Heard from Department of Human Services Director Barb Bofinger about plans for the White River Roundup and continued high levels of referrals for child welfare. There were 13 referrals in February. A dearth of nonprofit entities and a shortage of substance abuse treatment are part of the problem, according to casework supervisor Michelle Reese. “Substance abuse should be a hot topic,” Reese said. “It’s a community issue.”

– Drake introduced new Public Health Nurse Alice Harvey, who starts work today. Drake’s department is working on a federal grant that will “drill down” and figure out where the substance abuse problems are in RBC. Her department is also working with Providence Recovery Services, which will provide a local treatment facility in Craig.

– Drake said they had “one near miss” in retail food inspections, but the business was able to address concerns and pass inspection.

– A rabies scare surrounding a cat that bit a human in Rangely uncovered “holes” in the Colorado Department of Health and Environment’s courier system. Drake said she’d been assured Rangely was included in the testing system, but “we tested their system and it has a lot of holes in it.”

– This year’s tobacco grant will focus on prevention, not cessation, and plans to target the rodeo and Range Call.

– Drake added her department is “significantly below budget.”

– The board rescinded a letter to the Colorado Senate in opposition to SB 181. “Not that we don’t still oppose it, we do,” Moyer said. The bill passed the Senate March 13, before the letter was prepared.

– Approved a letter to President Trump in support of David Bernhardt’s nomination as Secretary of the Interior. Bernhardt, 49, is a Rifle native, an attorney, oil industry lobbyist and government administrator. According to Wikipedia, his activity in Colorado politics started when he was 16 and made his case before the Rifle City Council to not levy taxes on arcade games at a teen center he was starting. Opponents to his nomination cite his activities as a lobbyist for extraction and agriculture as reasons he should not be confirmed.

– Opened bids for the 2019 crackfill bid which will be awarded at the next meeting.

– Approved the Project THOR Meet Me Center Host Agreement for a monthly cost of $6,160 and a non-recurring cost after DOLA funding not to exceed $56,337.

– Approved an agreement with Stewart Welding for the construction of 16 secondary tower broadband platforms, $67,170.

– Approved a Memorandum of Understanding that will ensure Rio Blanco County’s participation with the the Colorado, Utah and Wyoming Energy Offices and the Ute Indian Tribe to establish the Western States and Tribal Nations Natural Gas Initiative. According to Commissioner Rector, Colorado is about to remove itself from the initiative. The board authorized payment to Colorado Mesa University Foundation for the Western States and Tribal Nationals Advocacy Sponsorship for $5,000 as part of the MOU. Mesa, Moffat and Garfield counties have also signed on.

The next meeting of the Rio Blanco County Board of Commissioners will be in Meeker on April 8.

RBC | Commissioners discussed budget issues with Finance Director Janae Stanworth Tuesday and scheduled workshops with both school districts in May to discuss funding. While currently the county is close to a balanced budget, uncertainty […]

RBC | On Tuesday, Rio Blanco County Commissioners discussed using emergency funds to help control this year’s outbreak of Mormon crickets. The insects have made an appearance again this year in the county. Wade Cox, […]