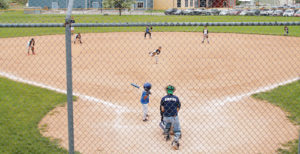 One of Meeker’s two 8-10 baseball teams trailed 0-4 before going on a five-run rally to win the game in their final at-bats. The young Cowboys defeated Professional Paint from Craig in the consolation bracket of the double-elimination, season-ending Recreation League tournament being held in Meeker. The championship game is scheduled in Meeker today at 6 p.m. Rangely still has one 8-10 team still in the tournament, but their 11-12 team was eliminated Monday in Rangely. One of Meeker’s two 11-12 teams was eliminated, but, as of press time, Meeker II was still in the consolation bracket.

Meeker has two 8-10 teams playing in the Parks and Recreation League, but neither could field a full team for games at Paintbrush Park on Monday. Having only eight players didn’t keep Meeker I from […]