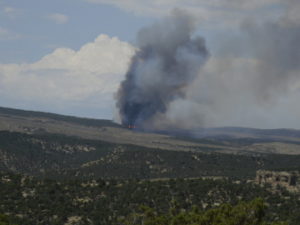 Three hot shot crews are assigned and two more crews are on order.

The largest of today’s incidents is the Logging Fire. Reported at 11:00 a.m. today, it is estimated to be 450 acres and burning actively. The fire is on the east side of Douglas Mountain in ponderosa pine and pinyon and juniper trees, about seven miles east of Dinosaur National Monument. A crew and three engines are assigned to fight this blaze.

The Reed Fire was reported to be 125 acres burning in grass, brush and pinyon and juniper trees. Ground forces consist of three engines and one hand crew. The single engine air tankers and the heavy air tanker made retardant drops on the north and east flanks to help border the fire.

The East Fork Fire is 450 acres and 70% contained. It started Monday afternoon and is about ten miles south of Elk Springs, Moffat County.

Thunderstorms are forecast for Wednesday with possible isolated showers.

No structures are directly threatened.

Business of the year says thank you

Dear Editor: We would like to thank the Rangely Chamber of Commerce for naming us the 2011 Business of the Year. We love being a part of the Rangely community and appreciate all of the […]

Please accept this belated thank-you letter on behalf of the Rangely High School class of 1999. Last month was our 10-year reunion,

How many parents have heard their kids say, “There’s nothing to do here.” Growing up in Meeker, I admit those words came out of my mouth but not very often. It’s not true and one […]