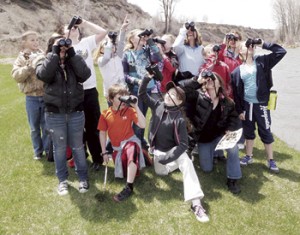 MEEKER I Each year, some 350 bird species migrate between summer and winter habitats. Their flights span state and national boundaries and have inspired unique partnerships dedicated to bird conservation. International Migratory Bird Day celebrates these migrating birds each year in May. For the past six years, Mary Cunningham and Natasha Goedert of the Blanco Ranger District, White River National Forest, have worked closely with Meeker Elementary School to raise awareness of our local bird species returning from their winter habitats. The 2011 theme for International Migratory Bird Day is “Go Wild – Go Birding,” focusing on the need to inspire more people to take that first step and make time to enjoy birds in nature.In-class activities at Meeker Elementary School included a power point presentation focused on the current year’s theme for first- through fifth-graders, a coloring contest for fourth-graders and games that tested students’ on a “Pocket Guide to Birds of the Sagebrush” donated by the Rocky Mountain Bird Observatory.Students learned that the terms “birdwatcher” and “birdwatching” were first coined by Edmund Selous, a British ornithologist, in 1901. Selous was also a passionate conservationist and wrote books for children describing the beauty of birds and urging them to get involved in conservation. Birding as a hobby really took off thanks to the 1934 publication of Roger Tory Peterson’s first Field Guide to the Birds and the increasing availability of binoculars after World War II. Like Selous, Peterson was a staunch advocate for wild birds. His guiding principle was the belief that education is the key to conservation. Today, an estimated 48 million people watch birds in the U.S. Birders are an economic force, contributing $82 billion each year to our nation’s economy, and participation is growing.In Meeker, birding trips to Circle Park gave fourth- and fifth-graders a “hands-on” experience to learn about our colorful area inhabitants. Students learned to use binoculars provided by the Forest Service (purchased with a “More Kids in the Woods” grant in 2010) to observe field marks on birds and then find them in their field guides. Upon arriving at the park, students were greeted by tree, barn, cliff and violet green swallows as they crossed the bridge and frequently observed an American dipper (water oozle) diving under the water or bouncing on a rock at the river’s edge. Early in May, students saw a Canada goose sitting on her nest on a small, grassy island in the White River. The cacophony of the red-winged blackbirds singing their chorus was always heard while the yellow and yellow-rumped warblers and an occasional lazuli bunting flitted through the shrubs on the hillside, captivating the students with their bright colors. Northern flickers flew in and out of cavities in dead cottonwood trees while the black-headed grosbeak sang his tune atop a bush on the horizon. To the delight of the kids, an occasional bald or golden eagle and groups of white pelicans and white-faced ibis were seen flying overhead, following the river. Even the most rambunctious students were captivated and excited each time a new bird was spotted.Younger students were treated to a walk around Paintbrush Park as the new school is in a prime location to view birds that live in sagebrush and open areas. Students were delighted to spot a western meadowlark (whose song sounds like “Meeker’s a prettylittletown” with some imagination!) belting a tune from atop a sagebrush and heard the red-winged blackbirds around the small pond. A pair of lark sparrows were observed along with some house finches in the playground. A Bullock’s oriole nest was sighted as well as a pair of American robins building their nest (right on the school building!). Students found a black-billed magpie incubating eggs on a large stick nest in a small spruce tree. Large flocks of blackbirds (mostly Brewer’s), ravens and turkey vultures were seen on most trips. One group was lucky enough to spot an American kestrel hunting for rodents. Watching the western kingbirds scold each other and listening to the mourning doves coo added to the students’ delight.There is so much to see when we become aware of the array of birds that our small town supports. Through International Migratory Bird Day activities, we can celebrate the beauty and diversity of our local birds while also raising awareness of conservation efforts aimed at providing habitat, both summer and winter, in our swiftly-changing and constantly more urbanized world. We can all make a difference by becoming partners in bird conservation.

Students on the eastern end of Rio Blanco County will officially start school September 4, but students have already been learning in the classrooms at the recently repaired Meeker Elementary School.

Meeker Elementary School (MES) was honored by the Colorado Department of Education (CDE) last week and received a $10,000 check for being selected as a National ESEA Distinguished School. Out of 750 eligible Colorado schools, […]