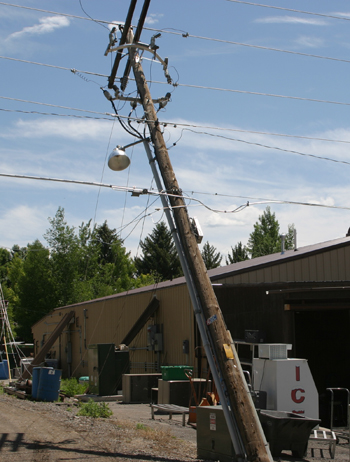 The lights went out in parts of Meeker on Saturday afternoon when two high-voltage power poles were pulled down on First Street, next to Stage Stop, turning the power off in the downtown district as well as at other businesses and residential neighborhoods in the area. White River Electric Association workers labored through the day and into the evening to restore power and install new utility poles.

Collins’ goats and lambs are winners this summer

MEEKER I Macy Collins has been showing her goats and lambs for the last several weeks. She had a great jackpot season, winning some cash, her first belt buckle and some other prizes. July 3 […]

MEEKER I As a fundraiser, Meeker High School’s yearbook staff will show two movies on Sunday, April 25 at the high school. At 1:30 p.m., “Alvin and the Chipmunks: The Squeakuel” (PG) will be shown. […]

Get counted! Respond to the 2020 U.S. Census online, by mail or by phone