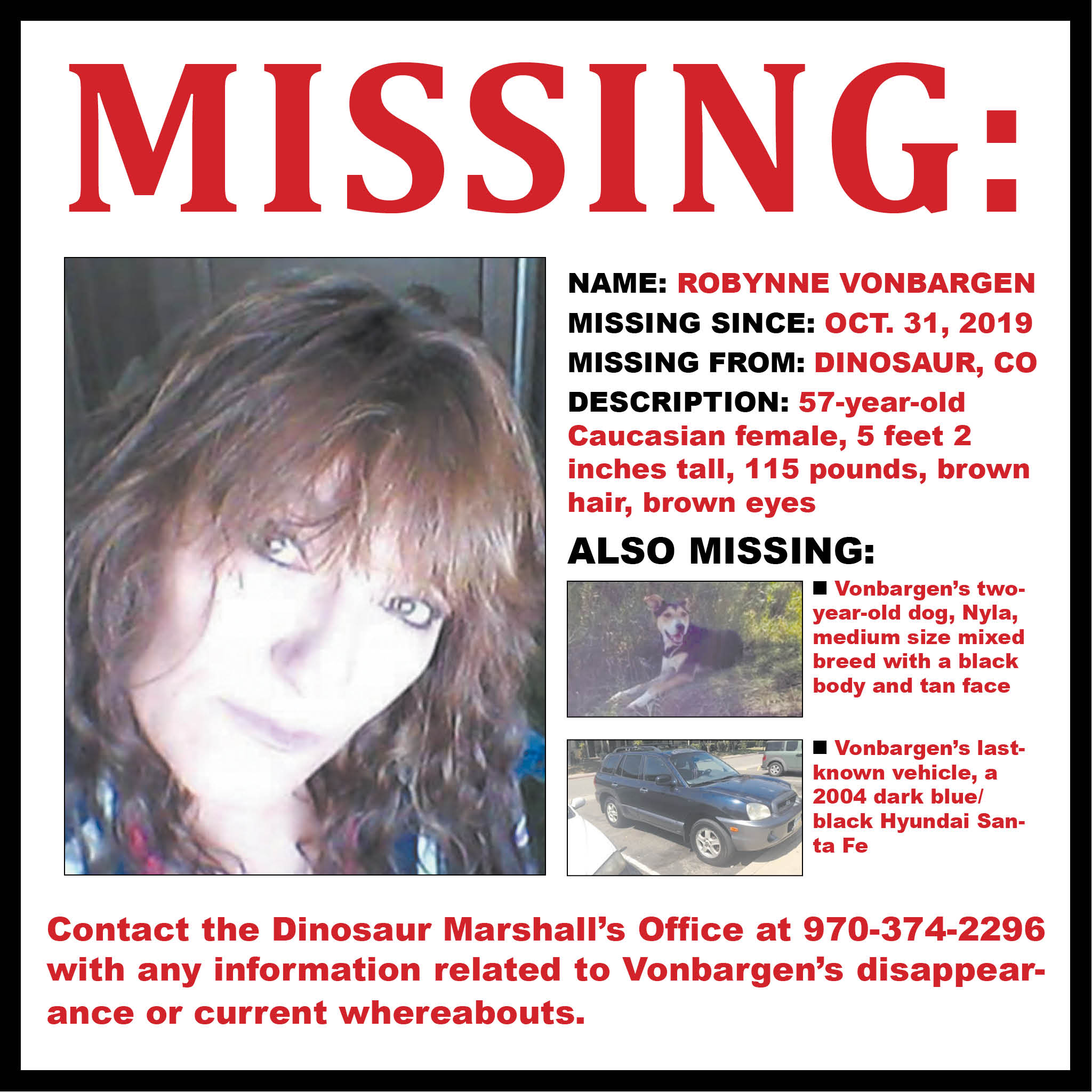 DINOSAUR | It’s been almost three weeks since any of 57-year-old Robynn Vonbargen’s friends or family have heard from her. Vonbargen, who lived in Dinosaur for the last year and a half, disappeared on Halloween with her dog, a car that belongs to her roommate, and $11.50 in cash.

“Her phone hasn’t been turned on. She left everything … her clothes, dog food, her booze, her TV,” says daughter Alecia Jenson. Jenson currently lives in Olympia, Washington, but spent almost a decade in Rio Blanco County. Her mom “goes back and forth” between Colorado and Washington with some regularity, but it’s unusual for her not to communicate with someone.

Over-the-road truck driver Brett Arnold, a friend of Vonbargen also from Washington, contacted the Herald Times last week to ask if there were any updates on Vonbargen’s case, which he learned about on Facebook.

“I believe she is in the ditch. Her dog is missing. Her vehicle is missing. We’re just concerned about her,” Arnold said.

At 4:15 p.m. on Oct. 31, Vonbargen called the Rangely Community Medical Health and Wellness Center (Rangely District Hospital) about a severe burn on her leg incurred while attempting to light a kerosene stove. Clinic receptionist Stormie Carson told Vonbargen she needed to come to the emergency room.

“It took a little doing to talk her into it,” Carson said. Vonbargen was worried about being able to bring her dog with her. Carson assured her she would meet her outside the ER and that she could bring her dog, and waited for her to arrive. But Vonbargen never showed up. There are some reports that she called the hospital again at 10 p.m., but Carson could not verify that.

“It looked like she had just stepped out to have a cigarette,” said Lyle Gaurmer, the owner of the house where Vonbargen had been living. “The way she left everything at the house, something is wrong.”

“The way she left everything at the house, something is wrong.” ~ Lyle Gaurmer, Vonbargen’s landlord

Gaurmer acknowledges that Vonbargen “has a drinking problem” but said the last time he spoke with her on the phone, she “was OK.” During that conversation, she reportedly told Gaurmer that Robert Freeman—an old friend from Washington—had come by and wanted her to come back to Washington with him, but she told Freeman no and “wished he would go away.” According to Jenson, Freeman has not been questioned by law enforcement. The HT was unable to reach Freeman by phone before press time.

“It’s not illegal to be a missing person.” ~ Dinosaur Town Marshal Larry Elarton

The Dinosaur Town Marshall’s office is in charge of the investigation. Because it is an open case, Marshall Larry Elarton was unable to provide details beyond saying a missing person report has been filed, his office had “talked to about 50 people” and had searched the area, including places she liked to go hiking with her dog.

Unofficial reports indicate her cell phone may have “pinged” in the Blue Mountain area shortly after her disappearance. Elarton says that area has also been searched.

“It’s not illegal to be a missing person,” he told Jenson and the Herald Times. Nevertheless, her family and friends hope to hear from her, or from someone who knows where she is.

Vonvargen, 57, is 5’2” with brown eyes and hair. She was driving a dark-colored 2004 Hyundai Santa Fe registered to Gaurmer, and had a medium-sized black and tan dog namaed Nylia or Nyla with her.

Anyone with any information on Vonbargen’s whereabouts is asked to contact the Dinosaur Marshall’s office at 970-374-2296.

Listen to this post DINOSAUR (AP) — Authorities have identified a boy who drowned while rafting on the Green River as 8-year-old Owen Gerson.

Listen to this post DINOSAUR | In July of 2020, more than 6,000 paleontological, archaeological, historical, and biological specimens were moved from Dinosaur National Monument to the Utah Field House of Natural History State Park […]