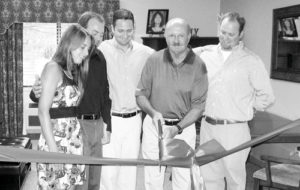 RBC I Friends and family of Sherry Pilcher gathered to dedicate a new residents’ library and lounge in her honor on July 15 at the Life Care Center of Evergreen.About 75 people crowded into the dining room to listen to tributes to Pilcher”s work at the center, where she was a certified nursing assistant from 1998 to 2001. She loved to read, said Kathy Price, admissions and marketing director, in a statement.After Pilcher’s sudden and unexpected death on Dec. 22, 2010, at age 56, community members donated nearly $7,000 in Pilcher’s memory to remodel a room for Life Care Center residents.She is survived by her husband, Paul Pilcher; four children, Cara, Austin, Garrett and Jordan; one grandchild; and four brothers and a sister.“Those who worked with her said she had so much love in her heart. What she did for people was remarkable,” said Lori Sein, executive director of Life Care Center, at 2987 Bergen Peak Dr.Pilcher exemplified the observation that “success in life is what you do for others,” said Sein, quoting Danny Thomas.She congratulated the center associates who turned a “tired family room that needed a facelift into the most beautiful resident library.” The room is furnished with a new big-screen TV, a touchscreen computer with printer and comfortable leather furniture. “It is a lasting tribute in Sherry’s honor,” Sein said.Terri Howarter, director of medical records, remembered Pilcher making homemade meatballs for a certain resident, bringing in special videos and finding Halloween costumes for the residents.“She was truly an angel,” Howarter said. Pilcher’s husband, Paul, said Sherry “loved working with older people.”
Reprinted with permission of the Canyon Courier.