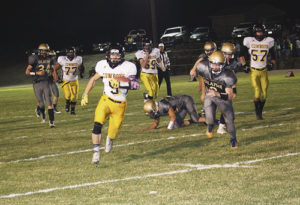 MEEKER I With a 42-21 win against the Olathe Pirates in the final game of the regular season, the Meeker High School football team capped off an undefeated (9-0) regular season as the Northwest League champions, as well as the No. 1 seed in the 2016 1A Colorado State Football Championships, which start this weekend. The Cowboys will host the Ellicott Thunderhawks in Starbuck Stadium Saturday at 1 p.m.

“This is a great tribute to this group of players, especially the seniors, they have worked hard during the off season and leading the team during the regular season” Meeker head coach Shane Phelan said of his team’s league title and his first undefeated regular season as a coach.
The Cowboys have qualified for the post-season play the past four years, and they are led by seniors Sheridan Harvey, Hunter Garcia, Cole Brown, Casey Turner, Tanner Slaugh, Chase Rule, Ty Gibson, Tyler Ilgen and Korey Hood.
“Congratulations to them for accomplishing something that hasn’t happened in a while,” coach Phelan said of the team’s undefeated regular season.
The Cowboys will now begin their quest to win a state football championship, something that hasn’t ever been accomplished in Meeker.
“We’re excited to get a home game against Ellicott in the first round,” coach Phelan said. “Historically, we get great crowds for playoff games and we hope the tradition continues.”
Before the Olathe game, coach Phelan said he was concerned of a let down after the Paonia game but “they came ready to play hard and their effort level was good.”
Against the Pirates, the Cowboys were able to move the ball on the ground but they scored the majority (five) of their touchdowns through the air, including the first four.
“We ran the ball more effectively and our passing game was good,” coach Phelan said.
The Cowboys scored on their first drive off a “shovel-pass” from junior quarterback Logan Hughes to Harvey and then a touchdown pass to Brown, who caught four passes, three of them for touchdowns, and gained 106 yards.
Hughes completed 12 of 21 passes for 239 yards and five touchdowns, including one to Garcia, who caught two passes for 48 yards and one touchdown.
Harvey caught six passes for 85 yards and he also carried the ball one time for a 20-yard touchdown. Sophomore Eli Hanks carried the ball nine times for 56 yards and scored Meeker’s final touchdown and Jorgen Stagg led all rushers with 59 yards of the 163 gained on the ground.
“Olathe is a good bunch that ran the single wing, so it took us a little while to work the kinks out,” coach Phelan said. “It was a team effort finding the ball, then like a rugby scrum, we would have multiple guys in on the tackles.”
Turner and Garcia led the team in tackles with 14 each, Rule finished with 12, Harvey was in on eight, while Gibson, Ilgen and Hood were each in on five.
Coach Phelan said Meeker played Ellicott two years ago and they had some “good young players.”
“I’m sure they are better now,” coach Phelan said of his team’s next competitor. “You don’t make the playoffs if you don’t have a good team.”

All in the Dunbar family

MEEKER I Many members of the Meeker High School football team have been gathering in Starbuck Stadium every Monday and Thursday this summer in preparation of the 2014 season.

MEEKER I Many Meeker football players have been lifting weights, playing catch and attending camps this summer, in preparation of the upcoming high school season.