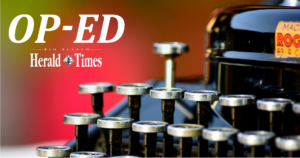 RBC I Stacy Bare came home from Iraq in 2007 with a traumatic brain injury and post-traumatic stress, unsure of where he fit into the world, and unmoored without the military.
Liquor and cocaine seemed the best means of coping, and he often thought of suicide, until a fellow Army vet took him rock climbing in Colorado. On a vast slab of sandstone, legs trembling and heart pounding, Bare found the relief that had eluded him.

“I’d be dead or in jail without climbing,” he says. “The outdoors gave me my life back.”
Bare, who is 37 and stands 6-foot-7, cuts an impressive figure; with his shaved head and unruly beard, he has since become perhaps the most prominent voice for taking veterans outside, to hang out and heal. He co-founded Veteran Expeditions, which runs climbing, rafting, fly-fishing and mountain-biking trips, and he now directs the Sierra Club’s outdoor recreation programs. And his focus has broadened to include environmental stewardship.
He sees conservation as an ideal fit for veterans, a continuation of their oath to protect and defend the country.
“Country is both the concept of our nation as well as the physical country,” he says. “Tell me what I fought for, if it wasn’t public lands, clean air and clean water?”
His thinking began to change a few years ago when he took several veterans and their families hiking in the mountains in southern New Mexico. Many hadn’t spent much time deep in nature, and they reveled in the experience.
The area, which President Barack Obama would designate as the Organ Mountains-Desert Peaks National Monument in 2014, wasn’t yet protected. How would people have these moments, Bare wondered, if the open spaces that made them possible disappeared?
“The only way this works is if we have public land,” Bare says. He enjoys challenging politicians who don’t support conservation or who decry federal land ownership
“You sent me to war and now you’re trying to take away that which has healed me? How was I supposed to get better if it wasn’t for public lands?”
Bare traces his lineage for this advocacy to what he calls the first veteran outing, when naturalist John Muir took President Theodore Roosevelt, a veteran of the Spanish-American War, on a three-day trip into Yosemite National Park in 1903. That outing brought greater federal protection of the area and deepened Roosevelt’s commitment to conservation.
The connection between soldiers and the land they defend is deeply rooted. During the Revolutionary and Civil wars, they often fought for the very ground on which their houses stood. (Bare has an ancestor who fought with the Marquis de Lafayette in the Revolutionary War and was paid for his service with a piece of land in West Virginia.)
But war veterans have also played key roles in conservation. David Brower, who led the Sierra Club from 1952 to 1969 and later founded Friends of the Earth, fought in Italy in World War II with the Army’s 10th Mountain Division. He and Martin Litton, a glider pilot in World War II, helped stop the Bureau of Reclamation from building two dams on the Colorado River that would have flooded parts of the Grand Canyon. Paul Petzoldt, another 10th Mountain veteran, founded the National Outdoor Leadership School in Lander, Wyo., in 1965, and Tom Bell, who flew raids over Germany as a B-24 bombardier and nearly lost an eye to anti-aircraft shrapnel, started High Country News in Lander, Wyo., in the 1970s.
In these lives, and in the work of veteran conservationists today, Bare charts a clear through-line of service to country.
“Land stewardship is a patriotic value,” he says. “That’s the kind of deep, steady patriotism that this country needs. Not the flashy, fiery outbursts.
“The ideals we’ve espoused in the Declaration of Independence and the Constitution haven’t always met up with the ideals we’ve lived,” he adds, “but in our public lands there is a physical embodiment of those ideals.”
Bare knows this view of conservation can be slow to catch on with veterans who may not have camped or hiked since their days in uniform.
A few weeks ago, Bare recalls, a veteran joined a Sierra Club outing in the forests of central Pennsylvania. The man had not left Philadelphia since he returned from Vietnam.
“If I tell that guy, right away, ‘Hey, man, you fought for Yellowstone,’ he’s going to say, ‘I fought to survive, and I’ve been home since 1972 fighting to survive.’”
By the end of the weekend, though, the man had drawn his own conclusions regarding the power of the outdoors.
“Had I known that was there,” he said as he left the forest, “had I had a buddy who took me out there a little bit earlier, my life would have been different.”

Brian Mockenhaupt, a contributing editor at Outside Magazine, writes from Phoenix, Ariz.

Listen to this post Dear Editor: Some people wanted me to let the little town of Meeker know how much they appreciated Meeker’s hospitality. This happened back on March 13-15. This group was called Healing […]

Listen to this post RBC I The Frank R. Lautenberg Chemical Safety for the 21st Century Act, as the update is called, is the biggest environmental law to pass Congress in two decades. It was […]