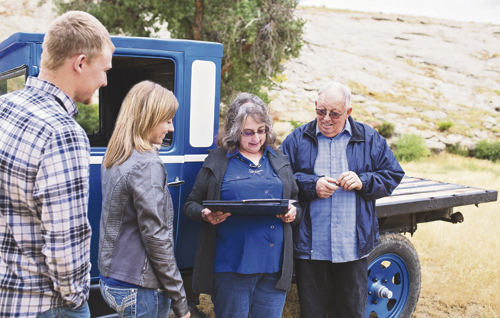 RANGELY | Kelsey Peters has always had a passion for cars. She and her husband Chance share a love for building, driving and admiring them. They had their eye on a little truck that seemed perfect for Dave and Jean Jordan, Kelsey’s grandparents. “Everyone knows them better as ‘Mamma and Pappy’,” Kelsey said. The Peters worked long and hard to get the truck, and that was just the beginning. They had an overflowing amount of tedious work and elbow grease ahead of them. Many months of late nights, early mornings and long weekends followed so they could meet their deadline. In September, the Peters set up a family photo session, telling family members they wanted pictures with the whole family because they’d never had them done before. “Mamma and Pappy didn’t know it was all about them,” Kelsey said. They hired a photographer for the day, and rushed to get the truck put back together, customizing every detail along the way. The morning of the photo shoot, The Peters “buttoned up” the truck and drove the truck to the photo location. Both Kelsey and Chance’s families were there for pictures and everyone except Dave and Jean knew what was going on. Iviana Bynum Studios took the family photos, and requested one last photo of Chance, Kelsey, Dave and Jean in front of the truck. The photographer gave Chance and Kelsey a wink after she got the last planned shot. Chance and Kelsey handed her grandparents the keys to the truck with a “thank you for letting us borrow your truck for family pictures,” a book the two had put together of photos of the process and a letter letting the deserving grandparents know how special they were and revealing the long-awaited surprise. More photos of surprised faces were snapped as the Jordans read the letter aloud. Chance and Kelsey met their deadline with enough accomplished on the truck for pictures and an entry in the Septemberfest car show as a “to be continued” project. Much more work is needed to get the truck completely finished but now the Jordans can be part of the process. Dave and Jean Jordan are the proud new owners of a 1929 Ford Model AA truck, custom built by Chance and Kelsey Peters.