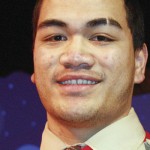 MEEKER I Alema Atoafa has completed the requirements for Scouting’s highest honor, the Eagle Scout Award, which he will receive at an Eagle Scout Court of Honor to be held at 6 p.m., Saturday, Feb. 5, at the Meeker LDS Church at 903 3rd St. Alema is a member of Boy Scout Troop 190 sponsored by the Meeker LDS Church and previously was in Cub Scouting and other Scouting units in California.
He is a charter member of the newly formed Venturing Crew 91 sponsored by the Meeker Lions Club where he will have an opportunity to earn the prestigious Venturing Silver and Ranger awards. Alema and his Eagle Scout friend Collin Cochran recently presented a flag ceremony with members of the American Legion and VFW at the newly formed Cub Scout pack 91 organizational meeting, and discussed their Scouting experiences for the new Cub Scouts who were very much in awe of both outstanding young men.
Alema is an outstanding student and talented athlete at Meeker High School where he is a senior, and participates in varsity football.
Alema is a member of the Meeker High School Drama Club and International Thespian Troupe 1284. He has played active roles in High School Musicals including Little Shop of Horrors. As a member of the ERBM Recreation and Parks District’s Center Stage Youth Theatrical Group he served as the lead sound technician for “Annie, Jr.” Alema will again serve as technical sound director and will also have a major role in the 2011 MHS Drama Club musical presentation of Grease. His many performing arts talents include an excellent singing voice. Alema has also held lead drama and musical roles at his former schools in California.
Alema’s Eagle Scout service project was an extensive modernization project for the main building entrance to the Meeker High School, including painting the area in the school colors of black and gold, and installing a concrete pad and picnic table for the enjoyment of students. To complete this project, Alema and a crew of Scouts and friends planned, raised funding for, and completed this extensive service project for his school, and was highly praised for the excellent effort and new look of the school.
Alema joins a small number of fellow Eagle Scouts from Meeker who have earned this prestigious award since the first Eagle Scout in Meeker, Phillip Pratt, received his award in 1948. Less than five percent of all Scouts earn the Eagle Scout Award. Over two million young men have earned the Eagle Scout award since Scouting’s founding over 100 years ago. Among these are many famous individuals such as astronauts, corporation presidents, physicians, lawyers, professors and college presidents, congressmen and senators, and a President of the United States, as well as many more distinguished professions. Being an Eagle Scout opens many doors for college admission applications, and careers as it is well known as a credential for outstanding leadership abilities and citizenship.
Please join Alema and his family and friends in the celebration of this distinguished accomplishment.

First and foremost, I would like to say thank you to everyone who participated in the sales tax leakage survey as well as those individuals and local businesses that helped to make this project possible.

Bullseye Taxidermy is member of week

MEEKER I The Meeker Chamber of Commerce Member of the Week is Bullseye Taxidermy. To read his story, go to www.meekerchamber.com.

The opening four games for lady Cowboy softball is not what the team wanted, but last weekend they handily battled in Aspen to bring their record back up to 50%. The team rebounded strong from […]