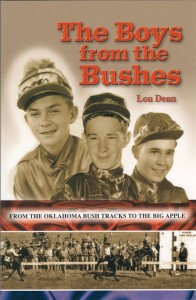 RANGELY I Blue Mountain writer Lou Dean, author of three sets of memoirs and two young adult novels, will sign copies of her latest book, “Boys From the Bushes,” at Sweetbriar this Saturday from 1-3 p.m.
The book, published by the Oklahoma Heritage Association, follows young boys (and a few girls) who began racing horses in the pastures of Oklahoma after World War II. They dreamed of becoming jockeys and perfected their skill match racing on the bush tracks, often an open field with no starting gate and finish lines marked only by rocks or lines scratched in the dirt.
The races eventually drew horse breeders from California and Kentucky and gamblers from everywhere, helping bush track racing explode into an industry. It also led the young riders to bigger, sanctioned tracks back East. Their experience and ability shocked the racing industry, and many of the bush track boys went on to national acclaim.
“Boys From the Bushes” came from a series of unlikely circumstances, Lou Dean said. After an encounter with an old acquaintance and former jockey-turned-trainer, she realized the story of the bush tracks had never been told. Soon afterward, she met Charlie Burr, the leading thoroughbred rider in the nation in 1951.
Their stories intrigued her. For the next four years, she spent six months out of each year in Oklahoma and Kansas, interviewing jockeys who had ridden during the bush track era.
A novelist and essayist by trade, Lou Dean discovered that managing the sheer mass of information and research was her biggest challenge.
“I had never done anything like it before,” Lou Dean said. “When I first connected with an editor at (the University of Oklahoma) Press, I told him, ‘I can’t write this as straight nonfiction. I have to write it from a personal point of view.’ What I’m hearing from people is that they can’t put this down, that it reads like a novel. But it is history, part of a relatively new genre called creative nonfiction.”
The readership for the book, Lou Dean said, is much broader than Oklahomans.
“Anyone who’s been around horses will be enthralled with the stories,” she said. “These people’s lives literally were connected to horses from the time they could walk. It was a different age, a different era.”
Historian and journalist Michael Wallis and American thoroughbred horse racing hall of fame jockey Chris McCarron have endorsed the book. McCarron is making “Boys From the Bushes” required reading at his North American Riding Academy, the only fully accredited training program for jockeys in the U.S.
“Boys From the Bushes” is available at Sweetbriar in Rangely and Avis’ White Bird Blooms in Meeker. A book signing will be held at Avis’ in March. For more information about Lou Dean and her work, visit her website at www.loudean.com or search “Lou Dean” on Facebook.

Listen to this post RANGELY I Author Lou Dean will sign copies of her newest memoir, “On My Ass: Riding the Midlife Crisis Trail,” at Sweetbriar Gifts from 2 to 4 p.m. on Friday.