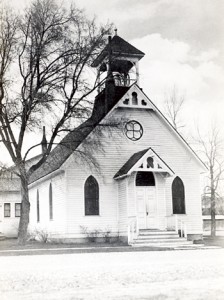 MEEKER I The fate of the historic Methodist church was determined at last week’s public hearing. Meeker’s town trustees voted 3-2 to deny a request to revise the Ute Park master plan, which would have allowed the church to be relocated to Ute Park. Trustees also denied a request to “store” the church at Ute Park.
“I was really disappointed in the outcome,” said Michele Morgan. Morgan has spearheaded the group of local citizens seeking a way to save the historic building. “That was a $100,000 donation they turned down,” she added.
The citizen’s group wanted to save the church for the community, envisioning it becoming a place to host weddings or generate revenue by hosting other community events in the future. Over the past several months, the group received financial pledges from community members and in-kind donations to cover the cost of moving, storing and placing the building on a permanent foundation.
“I was concerned with the cost of maintaining another building and not knowing how long we would have to store it,” said trustee John Strate after the meeting. It was Strate who made the motion to deny the request, seconded by trustee Andy Thomson. Trustee Rodney Gerloff, also voted to deny the request.
Trustees Katelin Cook and Regas Halandras voted against denying the request. Trustee Dan Conrado was not in attendance and mayor Mandy Etheridge would only vote to break a tie.
Etheridge read a prepared statement before the public meeting began, which stated in part:
“I believe the question here for the board is what the town should do in regard to the acquisition and subsequent responsibility for another building. As trustees, you are by definition entrusted by this community to make decisions on their behalf regarding appropriate use of town resources. I believe this project poses too much risk to the Town of Meeker and a strain on resources that are already limited – not only our budget, but our staff has been cut back and I believe that their time, energy and efforts would be better utilized focused on the projects currently at hand.
I respect the vision of this group and the fervor with which they hope to create something new and unique for the town.
I would love to honor the historic value of the church, I just don’t feel that it should be done with public resources on public property,” read Etheridge.
Morgan quickly disagreed with Etherridge’s statement but after further discussion, the motion was made by Strate to deny the request.
Morgan said the group will no longer pursue saving the historic building, which must me moved or demolished by July 1, 2011.
“The group had charitable intentions of saving the church for the community, so it was logical that it should be placed on community property,” Morgan said.

After Birth Ball a revived tradition

Listen to this post In 1972, Dr. Alan Jones, Dr. Gary Rupp and Dr. Bert White, the local veterinary team, decided that after a long calving season, it was time to get together and have […]

Listen to this post 7 Newz at 4 had the experience of a lifetime when they traveled to Knoxville, Tenn., to compete in the Global Finals Tournament for Destination ImagiNation. We worked together since October […]

Listen to this post MEEKER I Meeker High School cross country team head coach Kris Casey is looking forward to working with one senior and several younger runners this season.