RBC I Snowpack accumulation during January can simply be summed up as; better late than never! Weather patterns in Colorado were largely dominated by high pressure systems this past month and things remained dry throughout most of January. The storm system that finally brought some snow to Colorado during the last week of January has improved snowpack conditions statewide. Unfortunately these storms were not enough to boost the statewide snowpack to normal conditions. Recent snow surveys conducted by the Natural Resources Conservation Service (NRCS) show that Colorado’s snowpack continues to track below the long-term average, according to Phyllis Ann Philipps, State Conservationist. As of Feb. 1, the statewide snowpack was at 72 percent of normal and 90 percent of last year’s readings at this same time. The statewide snowpack percentage has remained nearly constant for two consecutive months (it was 70 percent of normal on Jan. 1).
The southwest portion of the state benefitted the most from the recent storms. The greatest increase was measured in the combined San Miguel, Dolores, Animas and San Juan basins whose Feb. 1 snowpack was at 88 percent of normal; up from 70 percent of normal measured on Jan. 1. In the Rio Grande basin the snowpack jumped 13 percentage points this past month, to 78 percent of normal as of Feb. 1. The Arkansas basin also showed overall gains in snowpack percentage, increasing from 61 percent on Jan. 1 to 63 percent on Feb. 1. With the storms focused mainly in the south, the northern portion of the state saw snowpack percentages remain constant or decline during January. The largest departure, as a percent of normal, from last month’s report was reported in the South Platte basin which dropped 13 percentage points. As of Feb. 1 the snowpack in this basin was at just 54 percent of normal, the lowest, as a percent of normal, in the state.
This recent snowpack data directly reflects what the state can expect for surface water supplies this coming spring and summer. Current streamflow forecasts continue to point towards well below normal runoff volumes in all the major river basins in Colorado. Adding to this bleak water supply outlook, reservoir storage across the state remains below average. Unless Colorado sees weather patterns that bring above average snowfall and precipitation to the state over these next few months, it is not likely that there will be much relief from the current drought conditions.
The table shows Colorado’s snowpack and reservoir storage as of Feb. 1, 2013. 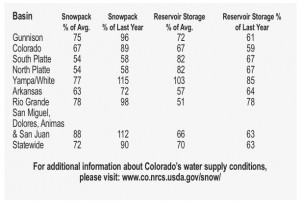 RBC I The Natural Resources Conservation Service (NRCS) in Colorado is currently working with cooperators who have pledged their assistance to help measure manual snow survey courses.

RBC I A cool and wet three weeks has brought a large change to the White River Basin snowpack and precipitation situation, with the three major reporting stations relevant to Rio Blanco County much closer […]

Snowpack below normal for year

RBC I Snowpack and precipitation levels are low in the White River Basin and there is some concern at this time, a local U.S. Forest Service official said Friday.