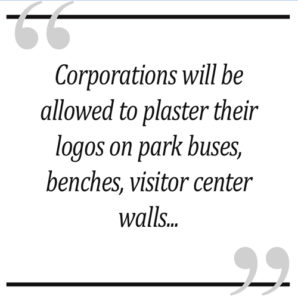 RBC I When I was a child, I remember passing through any number of national park entrance stations in our family station wagon. I remember the historic stone kiosks where the rangers greeted us and my excitement as we began the slow drive toward the greatest wonders of nature.
Visiting a national park felt a little like entering sacred ground; it was a place to be quiet, to pay careful attention, to absorb all the details and be grateful.

If anything, this feeling of reverence towards lands and sites managed by the National Park Service has intensified. When I worked as a ranger at Kings Canyon National Park in California, I found that much of the visiting public treated rangers like clergy. I took their respect seriously and tried to earn it, passing on both the science and the tradition of the national parks.
Indeed, for many people, national parks are a kind of church. They are special places that connect us to nature and to our country.
Now, it seems that this refuge from commercialism is at an end.
Out of financial desperation, Congress and the Washington Office of the National Park Service have decided on a new policy that allows advertising in our national parks. Corporations will help bridge the huge gap between what Congress appropriates and what the National Park Service needs to maintain and protect our national treasures.
Here’s how the new policy works: Corporations will be allowed to plaster their logos on park buses, benches, visitor center walls and other facilities in return for donations to the National Park Foundation.
Advertising banners could be hung from walls and perhaps cliffs and trees. Corporations will be able to put their logos and slogans on sidewalks and auditoriums. The ranger evening campfire program may become the Coke or Exxon evening program. And soon visitor centers may be named for car companies or sleep aids.
Our needs are astronomic, Will Shafroth, president and chief executive of the National Park Foundation, told the Washington Post. The parks don’t have enough money to accomplish their goals.
But this acceptance of commercialization in our parks contaminates them, and hampers their ability to serve as a peaceful respite from the rest of the world. It will also compromise the Park Service’s mission, which is to preserve and protect these places unimpaired.
Undoubtedly, the parks’ corporate sponsors will also seek to influence agency policy. After Grand Canyon National Park, for example, tried to ban disposable water bottle sales to address trash and litter problems, the Coca-Cola company delayed the policy for months as its objections went clear to Capitol Hill.
What’s more, the Park Service is now asking its park superintendents to become professional beggars, spending some of their time raising money from corporations as part of a $350 million fundraising campaign.
The libertarian movement and anti-government right have long sought to privatize our public lands, and their apparent strategy of starving our federal agencies of needed appropriations appears to be paying off. This policy signals that incremental privatization of the national parks has begun.
Of course, the National Park Service faces serious financial problems. Despite the international popularity of our parks, Congress has never adequately funded these national treasures. The National Park Service now has a nearly $12 billion maintenance backlog, which threatens the safety of those who use bridges, roads and buildings in our parks. The Park Service also faces an annual $760 million shortfall in its operating budget. This leads to short staffing, crumbling facilities, vandalism and staff burnout.
Yet the National Park Service budget is only .01 percent of the federal budget, just short of $3 billion dollars per year. Doubling or even tripling the Park Service budget would represent an insignificant uptick in the federal budget, yet it would bring vast public benefits to our parks, visitors, regional economies and national identity.
Our parks face many serious problems, but those problems won’t be solved by corporate branding. The answer is to quit nickel-and-diming the Park Service and encourage public support for robust budgets.
To celebrate the centennial of the National Park Service, Congress could vote to pay off the maintenance backlog over the next five years and double the annual appropriations to the agency over the long term. Congress could also establish an endowment for the national parks, much as museums and hospitals have done to stabilize their funding.
What’s called for now is focused outrage. Let’s say no to commercialism. Let’s remind the Park Service and Congress that nobody owns the parks.
These magnificent landscapes belong to the public: to all Americans and to our children.
To learn more about the new policy and comment go to: parkplanning.nps.gov/projectHome.cfm?projectId=60882.
Send comments to Interior Secretary Sally Jewell at exsec_exsec@ios.doi.gov.
Tom Ribe is a contributor to Writers on the Range, an opinion service of High Country News (hcn.org). He writes in New Mexico.

A Look at the News: Be happy! Worry is such a major waste of time, energy

Listen to this post RBC I Worrying is often an automatic response when you are facing problems, dilemmas, or uncertainty. Constant worrying creates physical and mental problems without providing any benefits. Worrying is like being […]

Guest Editorial: What is a water right? Do you really need one?

Listen to this post RBC I As we come to the close of the year, the decision about whether to file for water rights becomes important. First, it helps to understand what a water right […]

Guest Editorial: Opinions differ widely on the future of natural gas in country

Listen to this post RBC I The wide-scale deployment of hydraulic fracturing, the technique of blasting water and chemicals into the ground to release trapped hydrocarbons, has, over the last decade, vaulted the U.S. into […]