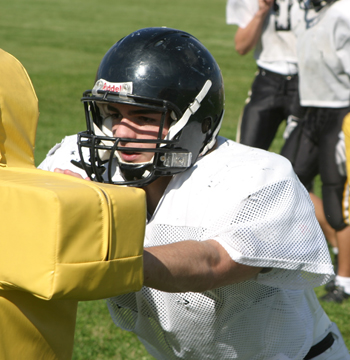 MEEKER I The Cowboys will open the 2009 season Friday night against the Basalt Longhorns at Starbuck Stadium.
Head Coach Shane Phelan returns for his sixth season as head coach of the Cowboys and will be assisted by Andy Coryell, Brett Steinacher and Matt Dupire. Phelan’s squads have made the playoffs three out of the past five years, running into either the state champion or the state runner-up the last two appearances. Last year’s squad was bypassed as a wildcard team by the state selection committee.
The ’Pokes had been grinding out two-a-days until school started Monday, with 41 players working toward the season opener.
“Our numbers are up a bit this year,” said Phelan. “We’ve got 12 seniors to provide leadership, which include a couple of newcomers to high school football. John (Wix) and Nate (Bradfield) have been doing well so far in their first year of high school ball.”
The 12 seniors include Tyrell Gerloff, Mitch Jacob, Brock Campbell, Jarrett Waldref, Spencer Madison, Wix, Ever Olivas, Bradfield, Colton Brown, Pat Love, Cesar Lopez and Dakota Rowlett.
The Cowboys were able to look at some different competition this past Saturday as they took part in a controlled scrimmage at Coal Ridge before the start of the season on Friday.
“We looked pretty good at some things, and we definitely have some things that have to improve,” said Phelan. “The scrimmage is always a good tool to evaluate some of our younger players. We use it to learn what we need to be teaching them, and they see what they need to work on. We don’t necessarily play our older group all that much as we know what they can do in game situations. They all get a few repetitions, just so they can get the feel of competition back.
“We’ve got some good preseason competition to get some idea of how we’ll do. Basalt is a good team and we’ll have to do things right to be able to compete with them,” Phelan added. “Olathe is the returning state champion, so we know they’re good, and they have a lot of big tough kids coming back. Roaring Fork has a great history of football in the valley and we know they’ll be tough. We’ll definitely have our work cut out for us on those games, and then we start into our league.”
Hotchkiss and Paonia are early preseason favorites in the league, according to Colorado Preps. Hotchkiss has received the early No. 8 state ranking, while Paonia checks in at No. 9. Paonia has gone to the spread offense and defeated Dolores 46-14 last week.
“After Hotchkiss and Paonia, Hayden has been and is going be tough again, Coach Brown at West Grand will always have his team competitive and it doesn’t matter what the records are, Rangely/Meeker games are always good games. We have to be ready to play each and every week,” Phelan said.
Kickoff is set for 7:30 p.m. Friday at Starbuck Stadium.

Listen to this post MEEKER | Meeker area Tea Party meetings will be resuming on Oct. 20 at 7 p.m. at Kilowatt Korner. Bring your questions, concerns and ideas to the meeting.

Long-time Rangely superintendent to get memorial

Listen to this post Books were a big part of Bob Mullen’s life, both professionally and personally. So, it’s only fitting that a sculpture — in Mullen’s memory — will be installed in front of […]