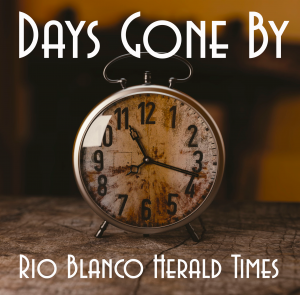 n Governor Bamberger and a party of Utah people again visit Meeker arouse much interest in railroad prospects.
n Meeker and Rio Blanco County had a good representation at Rifle on Apple Pie Day. Friz Ebler took first money in the free-for-all horse race, and Gerald Oldland took the second “pot.” George Wilber won one race, the Oldland boys and other White River lads took several first and second prizes.
n Ed Saltmarsh purchased three northwest lots in block 24 this week from A.C. Moulton. The property is a desirable building site, and Ed has already started work on a neat brick residence. And so we grow.

The Meeker Herald
50 years ago

The Meeker Herald
25 years ago

n Dorrance Eikamp accepted the championship trophy during the eighth annual Meeker Classic Sheepdog Trials.
n The annual Fireman’s picnic was held at City Park.
n The new landfill site at Wray Gulch is getting closer to becoming a reality as county road and bridge crews finish up the new road leading into the landfill located about 20 miles west of Meeker.
n Pat and Becky Hughes are pleased to announce the birth of their son Lathrop Patrick.

Rangely Times
50 years ago
n Seniors on this year’s Panther football squad are David Menge, Paul Pilcher, Lloyd Smuts, Bill Hume, Doug Dembowski, Rob Bertola and Mark Schumacher.
n Approximately 263 freshman and 124 returning sophomores have registered for the fall quarter at Rangely College.
n The names of some of the people who oppose the proposed new library building here would surprise you.
n Criticism is something one can avoid by saying nothing, doing nothing and being nothing.

n This year’s Grand Marshal, Donnie Collins, was born in Olathe. He moved to Rangely in fifth grade where he attended school in the old schoolhouse that is now serving at the Rangely Museum.
n More than 1,000 people turned out at Elks Park to partake of the great roast beef and other goodies at Septemberfest.
n Rangely Panthers of the week: defensive player Randy Elam, special teams player Cole Johnson and offensive player Chad Fairchild.

Up and Down El Rio Blanco: Motivation

Listen to this post Please accept this invitation from one small business owner to all others in Rio Blanco County to join me Tuesday, June 7, at 6 p.m., to listen to motivational speaker Cinda […]

Listen to this post RBC I The Colorado Department of Agriculture’s State Veterinarian’s office has released all hold and quarantine orders associated with the recent spread of Equine Herpesvirus (EHV-1) in the state; the disease […]