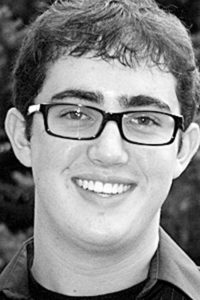 MEEKER I Through elementary, middle, and even the beginning of high school, Dakota Giao saw himself going nowhere. He was scarcely involved in anything and ended up making one hurtful decision.
Giao was born in Glenwood Springs and lived his entire life in Meeker. He went through Meeker Elementary School without any particular idea for his future and thinking he had no potential. In elementary school, however, Giao accomplished more than he believed he would and did the same through middle school. He was a student council class representative in sixth grade and was on the yearbook staff his eighth-grade year.
Freshman year, Giao found himself shoved into a variety of choices and he didn’t always make the best ones. After he had his wisdom teeth removed, he was given pills to deal with the pain. He finished the whole bottle, without hesitation. His parents found out. Giao believes that without his parents he would have gone down the wrong road. One he does not wish to take.
After that, Giao found music and music has become his favorite method of relaxation. He says he will never let it go.
Now a senior at Meeker High School, Dakota is surrounded by great friends. He was elected by the student body as the president of the high school. He spends time at school, has parties with his friends and spends time with his brother. Giao says he has a great brother and wonderful parents. Giao still enjoys his music and believes it will and has changed his life forever.
His is looking to attend Prescott, or his number one choice, Embry Riddle, for college. Meeker may be great but Giao doesn’t wish to live here his entire life. After graduation, Dakota Giao plans to live somewhere else.

MEEKER — The upcoming election on Nov. 4 is one of the most anticipated in history. However you must be registered to vote by Oct. 6, so the clock is ticking.

MEEKER | The new Meeker High School is under way despite the cold windy winter weather approaching us. Besides the speed bumps and having the take the “long way” to the sports gym, Haselden Construction […]