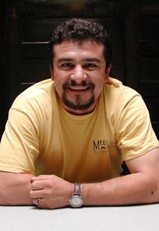 RBC I In a few weeks, Bobby Gutierrez will step back into his previous role at the Herald Times.
Jeff Burkhead will step down as editor of the Herald Times at the end of November, while Gutierrez will return to the position he previously held for two years.
“We’re fortunate to have someone like Bobby, who knows both communities in the county, who knows the area, who knows the newspaper, to step back in as editor,” said Mitch Bettis, owner and publisher of the Herald Times. “Along with Bobby, we have an experienced and capable staff already in place, people like Deb Pettijohn, Tonya Morris, Niki Turner and Caitlin Walker. So we won’t miss a beat.”
Gutierrez began his association with the newspaper more than 10 years ago, serving as a staff writer, photographer and advertising salesman, before becoming editor in 2006.
Two and a half years ago, Burkhead replaced Gutierrez as editor of the Herald Times, allowing Gutierrez to focus on new ventures — selling real estate and opening a new business, Cuppa Joe, with his wife, Wendy Gutierrez.
However, Gutierrez continued to keep his hand in the newspaper business, writing sports — his first love — and taking photos.
“I’m excited to return to the Herald Times and humbled to follow Jeff (Burkhead),” Gutierrez said. “Our local newspaper is the oldest business in Rio Blanco County and I believe the reason is the quest is the same today as was written in the first edition, more than 125 years ago by founder James Lyttle: ‘We will confine ourselves to the local interests of Meeker and the White River Valley and we will at all times, to the best of our ability, promote and protect the same.’
“I look forward to again working with the Herald Times’ experienced staff, marketing our services to our readers and advertisers. And I am grateful to Mitch (Bettis) for the opportunity,” Gutierrez said.
Burkhead, who came to Rio Blanco County after a long newspaper career in Kansas, will continue his association with Bettis. The two previously worked together at a newspaper in Kansas, before reuniting again when Burkhead took over as editor of the Herald Times in June 2008.
“Jeff has done a terrific job at the paper,” Bettis said. “Our readership is at an all-time high, and a sizable part of that is a result of Jeff’s ability to report on stories the community wants to read about.”
In his new position, Burkhead will be part of group of a dozen publications in the Lake of the Ozarks area that are owned by the same company, Lake Media. Bettis is general manager of Lake Media. Another colleague of Bettis’ and Burkhead’s, John Tucker, is publisher of Lake Media. All three worked together at a newspaper in Liberal, Kan., in the 1990s.
“I definitely leave with mixed feelings,” Burkhead said. “I’m excited to work together again with Mitch and John, and to move closer to my family, but I loved my time in Rio Blanco County and it will be hard to say goodbye. I met so many wonderful people here and had so many wonderful experiences.
“But the paper is fortunate to have such a dedicated staff, as well as someone like Bobby, who knows how things work and has such strong ties to the county, to take over as editor. It will make for a smooth transition,” Burkhead said. “I know the staff will continue to make the communities proud. They will do great.”

Listen to this post The Rangely Rock Crawlers would like to thank the following companies for their support and donations we received for the event:

Listen to this post MEEKER I Jim Fay, founder of The Love & Logic Institute and author of the best-selling book “Parenting with Love & Logic,” will present a half-day workshop Saturday, Oct. 2, at […]

Listen to this post As of press time Wednesday, the Wilson Fire nine miles north of Meeker had burned 350 acres and was 25 percent contained.