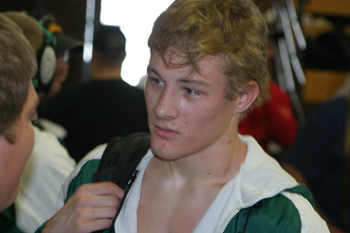 RANGELY I There has been a confirmed case of hantavirus in Rio Blanco County.
But the good news is the 18-year-old who contracted the dangerous disease is doing much better.
Devon Rose, who was a member of the 2010 graduating class from Rangely Senior High, returned home Monday night.
“He’s doing good,” said his mother, Kathy, on Tuesday. “He’s still having to breathe deep and sometimes when he does he has a little cough. … But they said that what pulled him through is his health, and being young helps a lot, too.”
Devon was a member of the Rangely wrestling team and was a runner-up at 130 pounds. He placed at state all four years during his high school career.
Devon initially was taken to Rangely District Hospital on Aug. 11 and from there to St. Mary’s Hospital in Grand Junction, before being transferred to a hospital in Albuquerque, N.M., which specializes in treating hantavirus.
“He’s progressing really well,” his mother said. “The doctors told us he will get better just as fast as he got worse.”
But the Rose family went through a scare.
“At one point, it didn’t look good,” Kathy Rose said. “It was so scary … when the nurse came in and she was looking at the numbers and said it didn’t look good.”
At first, doctors thought Devon might have pneumonia.
“Everybody was scratching their head, ‘What’s wrong with this young healthy guy here?’” Kathy Rose said.
Devon was diagnosed with hantavirus at the hospital in Albuquerque.
“The first outbreak (of hantavirus) was in the Four Corners area (shared by Arizona, Colorado, New Mexico and Utah),” Kim Long, director of the Rio Blanco County Public Health Department, said. “They specialize in this. So, very early on, they became experts on what this is and how to treat it. They pioneered the treatment.”
Long said Devon was the first confirmed case of hantavirus in Rio Blanco County in several years.
“We had a case approximately four years ago,” Long said. “The one previous to that was in the ’90s, I believe.”
Long said hantavirus cases can progress quickly.
“It is to be taken very seriously,” she said. “If they start having symptoms, we want them to be seen and not wait it out. If you get to the point where you’re having shortness of breath, it can move alarmingly quickly.”
Kathy Rose said Devon wasn’t sure where he may have come into contact with the disease. People are infected by breathing in the virus, which is transmitted by rodents.
“He gave us a couple of ideas,” his mom said. “The only place we can think of is the college weight room (at Colorado Northwestern Community College). One day when he was lifting, he was looking for something and he was going through lockers. If there was anything like that in there, that opening and shutting locker doors could bring a lot of dust into your face.” There has been no confirmation that CNCC is where he contracted the disease.
According to the website for the Centers for Disease Control and Prevention: “Hantavirus pulmonary syndrome (HPS) is a deadly disease from rodents. Humans can contract the disease when they come into contact with infected rodents or their urine and droppings. HPS was first recognized in 1993 and has since been identified throughout the United States. Although rare, HPS is potentially deadly.”
Devon will have a medical follow-up in about a week at Rangely District Hospital, his mom said, but he is expected to make a full recovery.

Listen to this post RBC | Wildlife conservation projects in 14 Colorado counties have been selected to receive grants from the Rocky Mountain Elk Foundation in 2010. The new RMEF funding, totaling $146,250, will affect […]

Listen to this post RANGELY | On Jan. 11, the Rangely 4-H council met for the first time after Christmas break. Torie Slagle led the meeting while Shelby Neiberger, Raelynn Norman, and Tessa Slagle ate […]