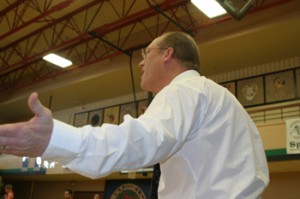 MEEKER I The Hayden Tigers took advantage of timely shooting and converted 14 of 21 free throws in the final period to knock the Meeker Cowboys from the ranks of the undefeated with a 65-58 upset victory in the championship game of the District 5 tournament Saturday in Rangely.
With the loss, Meeker must travel to Durango this weekend to participate in the regional tournament. Meeker will face off against the Alexander Dawson Mustangs from Lafayette in the first round on Friday. Ignacio, which won the District 3 championship, will be the No. 1 seed and will face Antonito in its first round game. The winner of these games will face each other for the right to play in the state tournament in Pueblo March 11-13.
Meeker squared off against Paonia in the first-round game Friday night. The Cowboys started slowly as they could not find the range from three-point land. The first quarter ended with the ’Pokes holding a slim lead against the Eagles by a 12-9 score. Meeker started to open the game up a little in the second though as the Cowboys outscored Paonia 23-9 to take a 35-18 lead at halftime. Consistent 15-point quarters in the next two stanzas provided the offense Meeker needed to seal up the game and advance to the championship against Hayden on Saturday. Meeker, which has consistently scored several three-point baskets in each game throughout the season, was only able to score one trey on a shot by Brock Campbell in the final period. Fortunately, Meeker scored enough “old-fashioned” two-pointers to get the convincing win 65-30.
Meeker’s offense once again started slow in the game. Mitch Jacob soon caught fire and scored the first eight points of the game. Hayden battled back and overtook Meeker 9-8 as the Cowboys were unable to convert on several trips down the court. Hayden took the first quarter 17-15. Meeker was unable to find a way to get the ball inside for the game. Post player Dakota Rowlett scored most of his 12 points on mid-range jumpers from the baseline, while Hayden held Meeker’s other posts Colton Brown and Tyrel Gerloff scoreless. Jacob was scoring for the Cowboys with a variety of jump shots and drives as he led all scorers with 32 points. Meeker’s second quarter put them up for the half 31-28. A couple of times in the second half, Meeker stretched its lead out to six points only to see Hayden scramble back in and tie it up or take the lead. By the end of the third period Meeker had a six-point lead 47-41. The fourth period was the Cowboys downfall as the Tigers outscored them 24-11. For the game, Hayden shot 19 for 29 free throws compared to the Cowboys 5 for 11.
Meeker wasn’t the only team to tumble in the district tournaments. Defending state champion Colorado Springs School was upset by Evangelical Christian in District 8, District 1 saw second-seeded Sargent upset Sanford in the title game, No. 3-seeded Burlington snuck past No. 2 Rocky Ford and then upset No. 1 Swink in the championship, and Heritage Christian upset Alexander Dawson in the semifinals of District 7. In the upcoming regionals, only one team in each district will advance to the state tournament.

Letter: Thanks for kindness, whoever you are

Listen to this post (To the anonymous person), your kindness and generosity are appreciated more than words can express. I look forward to the opportunity to pass it on.

Listen to this post Bradee Ann Seely Taylor and Kendra Seely are proud to announce the arrival of their baby sister Bradee Ann. Bradee was born Oct. 6 at Poudre Valley Hospital in Fort Collins. […]