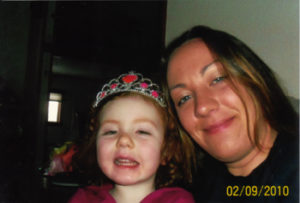 Kacey Pozorski celebrated her fourth birthday Feb. 9.
Two days later her parents — Kurt and Jackie Pozorski — took her to see a geneticist in Grand Junction, who then referred Kacey to have a brain and spine MRI done in Denver.
The magnetic resonance imaging tests revealed a mass on Kacey’s brain.
Thanks to a cancellation, the Pozorskis were able to get Kacey in to see the geneticist when they did. That set things in motion sooner, rather than waiting until April, when the Pozorskis had originally been scheduled to take Kacey for her appointment with the geneticist.
“They told us if we had not gotten the (earlier) appointment, if we had waited until April, she would’ve been gone,” Jackie Pozorski said.
Following the MRIs on Feb. 22, a neurologist in Denver told the Pozorskis the news: Their daughter has a rare, inoperable brain tumor called diffuse pontine glioma.
“My body just went numb,” Jackie Pozorski said of her response when she heard about her daughter’s terminal diagnosis. “I couldn’t think. I even asked the doctor, Is this real? Are you joking? I couldn’t believe it. It was hard to believe.”
“There really wasn’t much time to think about it, it came as such a shock,” Kurt Pozorski said. “We didn’t do nothing but hold her tight and pray. I don’t remember much after they told us. It was a pretty tough deal. We had our moments at first. We cried for the first couple of hours. But if we were to curl up in a ball, we couldn’t get nothin’ done.”
The Pozorskis left Wednesday for the University of Colorado Health Center in Denver, where Kacey was scheduled to undergo an intensive, experimental five-day radiation program.
“They’re giving her six weeks of radiation in five days,” Kurt Pozorski said. “We’ll stay there through the 15th, so we’ll be there for 12 days, because they want to give her body time to recoup and they have to closely monitor her after the radiation, because it’s experimental.”
The Pozorskis opted for the experimental radiation treatment, given the prognosis for children with diffuse pontine (or brainstem) gliomas.
“If we only have so much time with her, we don’t want to spend two months in the hospital,” Kurt Pozorski said.
Surgery was not an option.
“They can’t cut into it, because (the tumor) is so infused into the brain itself,” Kurt Pozorski said. “They don’t know where the brain stem ends and where the tumor begins.”
Before beginning the radiation treatments, doctors put Kacey on steroids.
“That’s to try and reduce some of the swelling on the brain,” Kurt Pozorski said Sunday. “It’s been helping. She’s been getting back to normal. She’s not totally symptom free, but she can walk and run. It does make her moody, but that’s just because of the medicine.”
Prior to being diagnosed, Kacey had exhibited symptoms consistent with diffuse pontine glioma, though her parents didn’t know why at the time.
“We initially went to the doctor because she was drooling and she had been stumbling a little bit and her left eye was going lazy,” Kurt Pozorski said.
Kacey, who just three weeks ago had a Tinker Bell-theme party for her fourth birthday, is “hanging in there,” her father said.
“She’s not in any pain,” Kurt Pozorski said. “She’s aware of what’s going on. We explained to her she was sick, and the doctor kind of explained things to her. She understands she’s sick. But she’s been doing pretty well. She definitely is being a little trooper.”
The Pozorskis, who are from St. Cloud, Minn., have family in Meeker, which has provided them with a support group.
“We have plenty of family around,” Kurt Pozorski said. “It has relieved a little bit of the pressure, just having them here.”
Kurt, who works for Cole Field Services, came to Meeker about three years ago. He arrived first to get established, and then Jackie and Kacey joined him a couple of months later.
“I just have to say those people are amazing what they are doing,” Kurt Pozorski said of his employers, Tom and Jenifer George. “The entire community has been great.”
A benefit fund for the Pozorskis has been set up at First National Bank of the Rockies.
“This wonderful family can use our support and prayers to get through this very tragic time,” Jenifer George said.
After Easter, the Pozorskis plan to travel to Minnesota to visit family and friends. A benefit dinner will be held for them while they are there in Minnesota. Plans are also under way to have a benefit dinner for the Pozorskis in Meeker. And, because Kacey’s condition is terminal, a Make A Wish Foundation trip is in the works.
“We’re talking about going to Disney World,” Kurt Pozorski said. “We’ll just have to see how she’s doing. We’ve been just trying to take it day by day. We’re just hoping everything works out and she’s able to stay with us for a while.”

The good news is CDOT has awarded Elam Construction a 3.7 mile Highway 13 modernization project from the south end of the work completed a couple of years ago southerly toward Rifle (MP 27.1-MP 30.8).

MEEKER I Kelly Moyer of Meeker has been selected to the 2009 Agriculture Future of America (AFA) Student Advisory Team.

MEEKER I Rory Wilson, a Meeker native and 1957 graduate of Meeker High School, is somewhere in the middle of the Pacific Ocean, sailing alone in his 27-foot sailboat from Bainbridge Island, Washington, on his […]