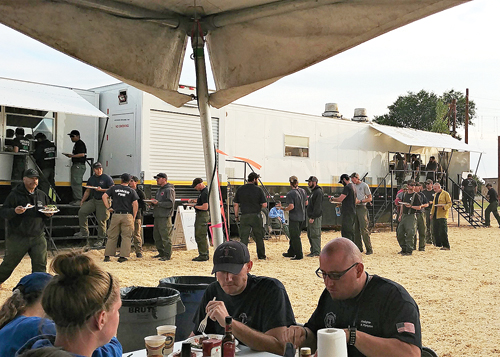 The Colorado Northwestern Community College (CNCC) Rangely campus served as the Incident Command Post and base camp for the Bureau of Land Management (BLM) Northwest Colorado Fire and Aviation Unit fighting the Red Canyon and Indian Valley Fires in Rio Blanco County. The unit arrived on

Monday, July 30 and utilized roughly 500 personnel.
The southeast side of campus was dotted with tents, signs, shower trucks and other support equipment. The Weiss building, which houses the campus student center and bookstore, contained the “war room,” public information center, medical aid and other staging areas.
The fires, both started by lightning, were at varying stages of containment as of a report from inciweb.nwcg.gov on August 8. The Indian Valley Fire, located 16 miles northwest of Meeker, was at 99 percent containment. The Red Canyon Fire, 31 miles south of Rangely, was at 88 percent containment.
CNCC and the communities of Rio Blanco County are grateful to the firefighters for their service.