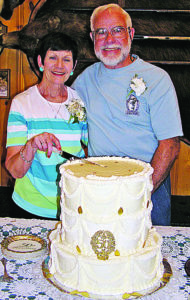 Temperatures outside have been cold recently but Ken and Betty Hayden offered a warm welcome to the Rangely home where they’ve lived for more than 50 years. Family photos, rewards from their hobbies and part of a tree that symbolizes their love create an amazing impression of their lives.
The carving on the tree reads “Ken loves Betty 54,” surrounded by a heart. Ken carved it on their honeymoon. Each year they returned to the Marvine campground to enjoy the scenery and check on the tree, eventually bringing the carved part home.
They love the outdoors — hiking, hunting, shooting and taking pictures. The Trappers Lake amphitheater, painted on a wall in their home, serves as a vivid reminder of the time they’ve spent in the high country.
Ken’s family moved to Rangely in 1945 from Grand Junction when his father was just a couple years out of the Navy after the war. He bought the grocery store and the family ran the Bestway store for more than 60 years. Ken and his two brothers, Darrell and Ron, grew up in the grocery business and learned the value of honesty and the importance of compassion and strength in a small town store.
The boys attended grade school three days a week at the time because the town was growing and there was not enough room for all the kids. School was in session six days a week to accommodate the two three-day sections.
Betty moved to Rangely in 1947 from Gillette, Wyo. She has two sisters who also reside in Rangely, Patty Powell and Sandra Young. Their mother, Mossie Percifield, celebrated a birthday this summer and had three of her sisters with her. Mossie has two great great-grandchildren now, representing five generations.
Ken and Betty were high school sweethearts. They were graduated in 1953 and married in 1954. Ken ran the grocery store and Betty worked for the Texas Company during their first years of marriage.
They have two sons, Mark and Kris. Mark and his wife, Donna, have two children, Tim and Shana. Tim and his wife, Karen, have two children, Hunter and Kennedy. Kennedy is named after both grandfathers, Ken and Eddie. Pictures of Ken and Betty’s kids fill their home and they are very proud of their accomplishments. Grandson Tim, a former student/athlete in Rangely, was recently named the outstanding principal in Kansas.
Ken and Betty’s strong family values helped make their home and business a consistent standard of excellence. The grocery business spanned three generations, surviving in a town where population and income was anything but consistent. They loved working for the community and truly appreciate Rangely.
“In a nutshell, it is the memories,” Ken says about his favorite things in Rangely. “All of my memories were experienced here … I fell in love here, married here, we had our children here, raised them here. It is the hundreds of people that I have known and still know here. So many good people.”
Betty added that she likes that Rangely is small, “It’s all we’ve known, and it’s a friendly town.”
In May, Ken and Betty will have been married 57 years. They have been hiking, biking, camping and just enjoying the outdoors together since the day they were married. From Marvine to Trappers Lake and all over the high country, they have pictures and memories of so many beautiful areas.
They have traveled across several states to shooting competitions and on hunting trips, and a den full of awards and mounts proves their dedication to their hobby. Ken is very modest about his photography and shooting awards but walking into the den is absolutely overwhelming. More than 400 trophies fill the upper shelves. A record-breaking 10 foot, 4 inch bear stands in one corner. Mountain goats, elk, caribou, mountain lions and pictures line the walls. Not just average pictures but brilliantly developed black and white photographs of family events and hunting trips captured forever. The den is a stunning collection of the memories they speak of so fondly, just as their attention to detail, willingness to work hard and appreciation for opportunities evidence their history of success in marriage, business and hobbies.

ANNOUNCEMENTS ATV, Boat and Snowmobile Owners! You can now renew your Colorado OHV registrations on line at: www.parks.state.co.us.

RANGELY — I am back from the Creative Curriculum Conference in Denver (braving bad roads and weather).

RANGELY I Each week, the Cell Phones for Soldiers program mails approximately 12,000 calling cards to veterans at home and soldiers overseas. Each card provides veterans and troops 2-1/2 hours of talk time with family […]