MEEKER | The Meeker girls’ varsity basketball team ended 2017 on a winning note, after defeating the 3A Coal Ridge Titans and the 3A Battle Mountain Huskies in the final two games of 2017, with both of them happening in front of hometown fans.

“The girls found a rhythm Thursday against Coal Ridge and kept it going into Friday against Battle Mountain,” Meeker head coach Jamie Rogers said. “Our defense came alive and it created a lot of offense. In both games, Julia (Dinwiddie) and Tori (Lasker) battled for offensive rebounds and gave us a lot of second opportunities.”
Both teams scored 11 points in the first quarter, then Meeker took a four point lead into halftime and a 13 point lead into the final quarter, where the Cowboys outscored the Titans 18-12, to win 53-34.
Lasker led the lady Cowboys with 17 points against Coal Ridge and brought down seven rebounds, as did Dinwiddie, who score seven points too. Megan Shelton scored 15 points against the Titans, while Gracie Bradfield scored nine and Sierra Williams added five.
Meeker pounded the Huskies the following night 78-34, also in front of home, where all of the varsity players were able to play and 12 of them put points on the scoreboard.
Meeker jumped out to a 19-10 lead at the end of the first quarter, then scored 23 points in the second quarter to take a 42-19 lead into the locker room at halftime. The lady Cowboys put the game away in the second half, holding the Huskies to three points in the third quarter, while score 25 of their own.
Dinwiddie and Shelton led the team with 17 points each and Dinwiddie led the team with eight rebounds. Shelton hit three, three-pointers, Dinwiddie had one, as did Sierra Williams, Matilda Brown and Madison Kindler. Williams finished with seven points, Brown had five, Kindler three, Riley Pertile scored six, as did senior classmate Brittney Adams and Bradfield. Lasker and Kenzie Turner each added four, sophomore Kirsten Brown added a basket and junior Ellie Anderson added a free throw.
Meeker will come back and host West Grand Jan. 5, then play in Hayden the following day. The lady Cowboys will then play in Baggs, Wyo., against the Little Snake Rattlers, Jan. 9, then in Rangely, Jan. 9, before host North Park, Jan. 12.
“We start the new year with five games in seven days and four of them will be league games,” Coach Rogers said. “I think our league will be strong again this year, as Rangely and Soroco have good shooters and Vail Christian is 6-0.”
caption id=”attachment_54831″ align=”alignleft” width=”185″] 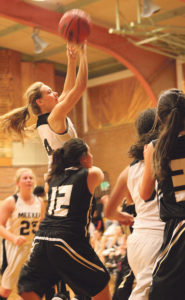 Meeker junior Gracie Bradfield takes a jump shot over Battle Mountain defenders to score two of her six points against the Huskies, helping her team end 2017 on a winning note. Bradfield and her teammates will start 2018 with a home game Jan. 5 against the West Grand Mustangs, starting a five-game stretch in seven days.
[/caption]