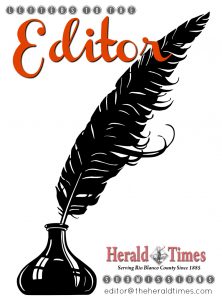 The libertarian ticket of Johnson for president and Weld for vice president provides a huge amount of executive experience acquired when they were governors. I believe governors are the most qualified politicians to ascend to the presidency. With this ticket we have a former governor available to assume the presidency. Johnson and Weld believe in limited government intrusion while operating within the bounds of the Constitution, which places them in line with current public sentiment. They are fiscal conservatives and social liberals. In comparison, Clinton is untrustworthy and is for big government and the promotion of welfare programs. Trump is an extremist who could ignore the Constitution and get us into deep trouble in the world. He is not qualified to be President. We need experienced, trustworthy, and normal people leading our country. Support the Johnson/Weld ticket in the polls so they can participate in the presidential debates.

Thanks to Rio Blanco County voters

Dear Editor: We would like to thank and commend all 3,508 Rio Blanco County voters who cast their ballots in the Nov. 8 election. This was an 87.9 percent return from the 3,992 active voters […]