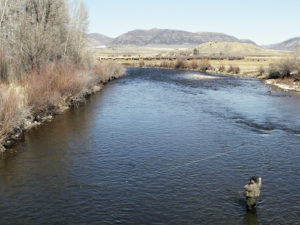 RBC I Colorado Parks and Wildlife urges hunters and anglers or anyone who wants their voice heard regarding wildlife issues to attend the next NW Region Sportsmen’s Roundtable caucus, to be held in Grand Junction on July 13 at Colorado Mesa University, Meyer Ballroom in the University Center, 1455 North 12th St.

Several important topics are on the agenda, including the election of two regional representatives and a presentation by CPW’s Policy and Planning section seeking sportsmen’s input on funding the future of wildlife management and conservation in Colorado.
CPW anticipates budget shortfalls that could be offset by increasing resident license fees. The last increase occurred in 2005, and, since 2009, CPW has cut or defunded 50 positions and cut $40 million from its operating budget. Wildlife managers caution that additional cuts are inevitable without an increase in revenue.
“Colorado’s wildlife faces more pressure now than ever before, including a growing human population, increasingly fragmented habitat and fewer young people involved in hunting,” said NW Regional Manager Ron Velarde. “We have already undergone significant belt-tightening and now we need to find effective ways to increase revenue. We need to have this important discussion with hunters and anglers.”
Velarde adds that CPW’s wildlife management programs are funded by user fees, generated primarily by the sale of hunting and fishing licenses. Unlike other state agencies, CPW does not receive general fund revenue.
Currently, a limited elk license for resident adults costs $46. Resident youths pay $10.75 for limited deer, elk and pronghorn licenses. Limited deer license and pronghorn licenses are $31 for resident adults.
“Colorado is clearly one of the premier big game hunting areas in the country and that is a testament to the hard work and dedication of the state’s wildlife managers,” adds Velarde. “When you compare our resident license fees to states that do not provide the same quality experience found here, the need for an increase becomes very evident. We are prepared to make the case.”
The Roundtable consists of four appointed members and two elected members from each region. Twice each year, the Statewide Sportsmen’s Roundtable meets with the CPW director and other members of CPW’s leadership for detailed discussions about a variety of wildlife management challenges.
Anyone interested in one of two NW Region elected positions are encouraged to attend the meeting. The election will be held the same evening with votes cast by attendees. Elected members can serve two-year terms and are expected to organize regional caucus meetings and be available to constituents, serving as their representatives for regional concerns during the statewide meetings.

Many kids and their families showed up at Circle Park in Meeker on Saturday to enjoy Youth Fishing Day, sponsored by the Colorado Division of Parks and the ERBM Recreation and Park District.

RBC I The big game hunting seasons are approaching quickly and now’s the time for hunters to begin preparing, reminds Colorado Parks and Wildlife.

RBC I After a Colorado Parks and Wildlife investigation spanning several states and two hunting seasons, a trio of men from California have pleaded guilty to numerous wildlife violations in Colorado and New Mexico, dating […]