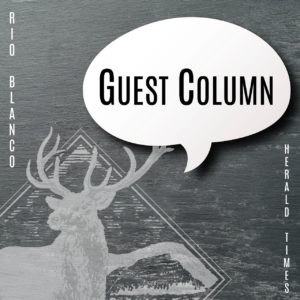 MEEKER | “You don’t see my card on the door, do ya?” the elderly gent asked. Dressed in a cowboy hat, plaid shirt with pearl snap buttons, Wrangler jeans, and well-worn boots, he looked to be a longtime resident of my new community. He held the post office door open, as he leaned close to the glass to peer at the little white cards posted on the glass. I looked at the square white label attached to the front of his shirt. I thought it might have his name on it, so I could see if his name matched one on the announcements. My hopes dissolved when I read the combination of uneven lettering mixed capital and lower case letters conveying an unusual request: “Please identify yourself, I don’t see so good.”

I laughed nervously when I realized the old cowboy was making a joke and blurted out a quick thank-you before moving through the small lobby to go check the mailbox. He shrugged, glanced up, held the door for another patron and tipped the brim of his cowboy hat slightly in greeting.

“Ey Gawd, I tell ya, these days I see too many names I know.”

Years later, I stood directly in front of the familiar glass door and was faced with a blizzard of white memorial cards. I didn’t dare take a cursory glance much as I did in those earlier days. I had already faced a six card day one early spring morning. I did not have to wear a little note on my coat to alert others that they needed to identify themselves, as I continued to have 20-20 vision when I used my glasses. The problem was not visual, it was emotional, as I often found myself going to work with tears streaming down my face.

These days a three or six card day may come into view as one walks through the front door at the post office. There is a subtle difference, however. They are posted on the glass next to the glass door. The placement on the side window tamps down the visceral effect when a close friend’s name comes into view.

These first impressions of my new community of 2,200 souls more than four decades ago has stayed with me throughout the years. The realization that I had moved into an insular little town hit at that moment when the cards, which I had assumed to be public service announcements, turned out to be death notices. Each one listed all the pertinent information as well as the funeral arrangements. With no local radio or television station, news of someone’s passing was spread by word of mouth as soon as it happened, and notification was then posted on the place most likely for everyone to hear the news—on the post office door.

A few years ago I held the post office door open for a man who appeared to be in my age group.  His almost imperceptible nod, as he peered through his reading glasses, prepared me for a variation on the old theme of the cards on the post office door. I was startled by his improbable answer when I asked him the usual question, “How is it going?”

As he brushed by me averting his eyes, I heard him say, “Well I don’t see no cards for us on the door now, do you?”

By Dolly Viscardi | Special to the Herald Times

Editor’s Column: News isn’t always what you want to read, or what we want to print

Listen to this post If liberty means anything at all, it means the right to tell people what they do not want to hear.” ~George Orwell We are wildly blessed to live in a place […]

Listen to this post At first glance the old trailer by the side of the road appeared to be just one more addition to someone’s collection of old vehicles. No one seemed to notice it. […]

Listen to this post RBC | In this article, I summarize scientific consensus on the state of the global climate and explain the basis for climate predictions. Climate projections are based on computer models, and few […]