RBC I Luciano Madrid pleaded guilty Friday to an amended felony charge of intent to distribute methaphetamine and faces two to six years in prison. 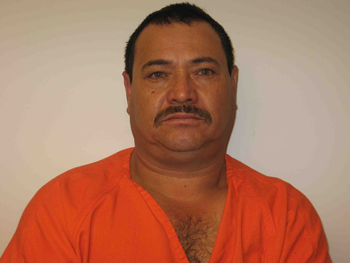 And as he was being led out of the district courtroom, his last word to the judge was, “Gracias.”
Speaking through a Spanish-speaking interpreter, Madrid, 45, answered, “Si,” to Judge Gail Nichols’ questions, including if he understood the charges against him and if his decision to plead guilty was of his own volition.
“He was going to go to prison,” said Jay Barasch, deputy district attorney. “I was not going to agree to a plea agreement that would have agreed to probation.”
Madrid was arrested April 21 in Rangely for selling methaphetamine to a confidential informant.
During Friday’s hearing at the Rio Blanco County Courthouse, the judge, speaking through the interpreter, asked Madrid if he had possessed methaphetamine and if he attempted to “give it to somebody else.”
He answered, “Si,” to both questions.
By pleading guilty, the judge told Madrid he was giving up certain rights, including the right to post bail, the right to a preliminary hearing, the right to a trial by jury and the right of presumed innocence.
“By pleading guilty, you’re giving up all of these rights,” the judge said.
Madrid, who is in the country illegally, could also face deportation.
Madrid had appeared in court July 17, but because an interpreter was unavailable, his case was continued until last Friday.
Besides serving time in prison, Madrid could receive mandatory parole and could possibly be fined. The judge ordered a pre-sentencing report and scheduled sentencing for Sept. 25.
“You understand with the law, the sentencing is entirely up to me?” the judge asked Madrid.
Again, he answered, “Si.”
Then, on his way out of the courtroom, he thanked the judge.
Madrid continues to be held at the Rio Blanco County Detention Center.

Listen to this post I would like to thank all 213 voters that supported me in the election, I really appreciate your support and because of you I intend to try again. I’ll be back. […]

Listen to this post Ten fingers, ten toes, two little eyes and a nose, with love and grace our family grows. We joyfully announce the birth of our son, Joshua Liam Titmus (Jagger) in Vernal, […]

Listen to this post For nearly 30 years as a coach and teacher, Bob Tucker touched the lives of students. Tucker died in 2006, but through a golf tournament honoring his memory, his legacy is […]