“We didn’t wrestle to our potential,” said head coach JC Watt. “A lot of improvement from last year for the kids who have been here before, and three freshmen attending for the first time, with a few jitters.”

This is Kennedy’s freshman year wrestling and his first trip to the “big show.”

“Trae wrestled great and had an excellent tournament,” Watt said. Kennedy’s second round was the hardest one, wrestling Collins from Wray who went on to take the championship at 106 lbs. Kennedy wrestled six matches and took fifth place. Kennedy placed in every tournament he competed in and will be wrestling in Freshman Sophomore State on March 7.

Goedert, improving over last year with a win, did not place, but Watt said, “Ty is really light for his weight class, but he won a match and that is a good improvement.”

Senior Charles Curry made his first trip to state, wrestling Burr of Sedgwick Fleming in round one, who ended in fifth place for the 126-pound weight bracket. “It was really nice to get Charles there,” said Watt, “he had a really successful season and at state wrestled well.”

Connor Blunt, another freshman, “Had a really tough weight class,” according to Watt, and some jitters, but the experience will help him in the future.

Dax Sheridan, making his second trip to state as a junior, had a tough weight class as well. He took on Baldonado in round one who went on to take fifth place. “Daxter had a hard field of kids, but we saw improvement over last year in his wrestling,” Watt said.

Colby Clatterbaugh, another junior, went from not placing last year to making the finals this year. “Colby saw a lot of improvement over last year, he didn’t wrestle well enough to take first, but Palansky is a tough wrestler,” commented Watt. “It’s great to make finals, especially after not placing the year before.” Clatterbaugh placed in every tournament this year.

Senior Ridge Williams did not make it to the podium but “provided leadership in the wrestling room throughout the season,” Watt said. “Ridge lost in the final eight for the third year in a row and it would have been nice to have him get a medal.”

Tanner Musser wrestled at 220 pounds. “It is tough to be a 220-pound freshman wrestling all the older, more experienced kids, but he did well,” Watt said. Musser will also be attending Freshman Sophomore State this year alongside Kennedy.

This year is not over; the Cowboys will continue to practice and three are headed to nationals at Virginia Beach. Kennedy, Clatterbaugh, and Musser will continue practicing and travel with coaches Justin Grant and Trevor Grant for the three-day wrestling tournament over spring break. 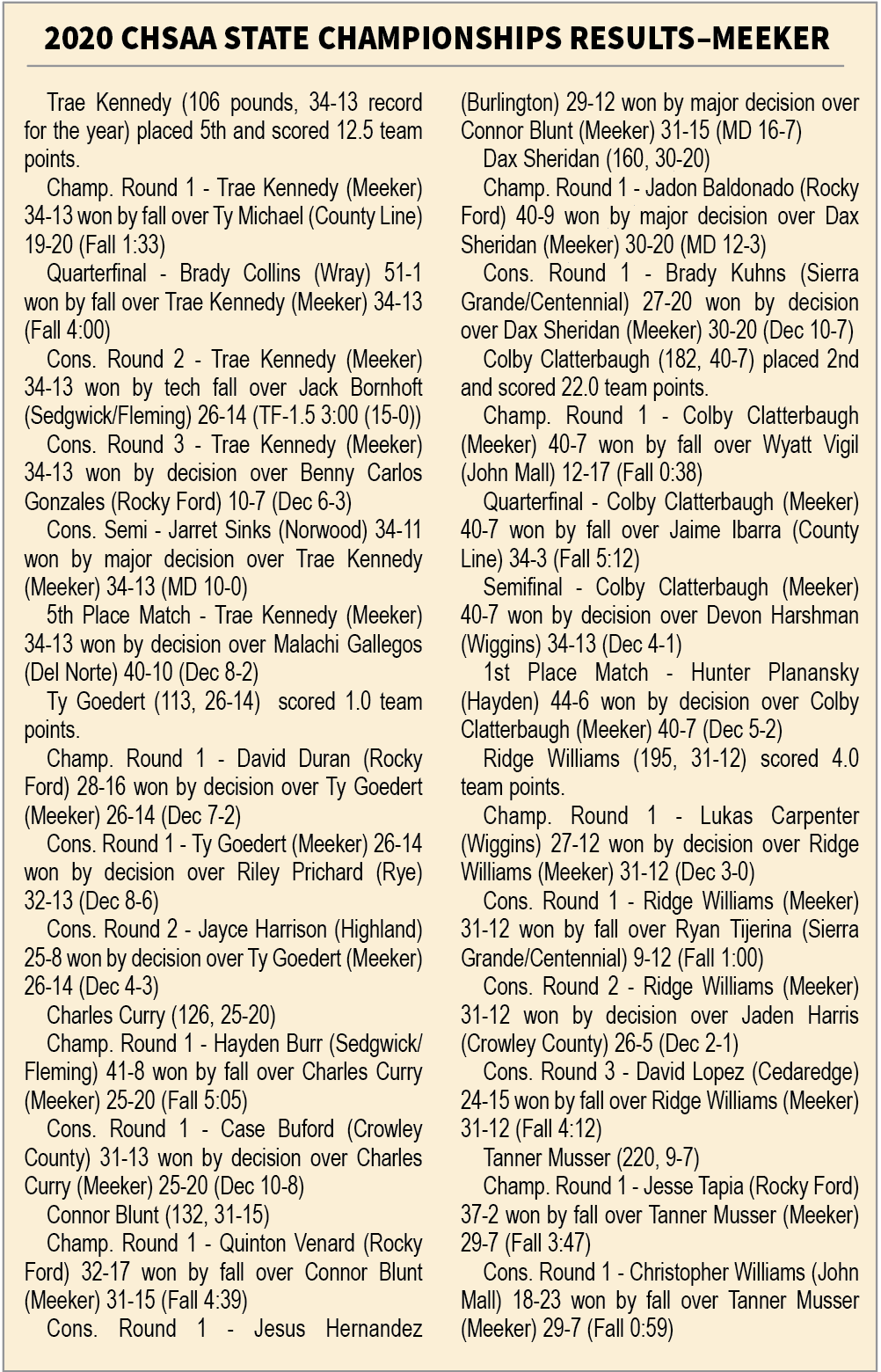 RBC | With open gyms and tournaments in other states, RBC club wrestlers participated in the Tournament of Champions (TOC) in Vernal, Utah, last Saturday. The TOC has been known to be one of the […]

MEEKER I Varsity opened the weekend with a dual in Cedaredge, it was supposed to be a tri dual, but due to weather Buena Vista was unable to attend. Each team had two open weights, […]