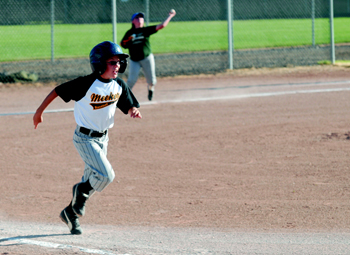 For the second day of the Craig Parks and Recreation end-of-season 8- to 10-year-old baseball tournament, a No. 1 seed advanced and the No. 4 seed hung on long enough to move on to the quarterfinals.
Wednesday featured a match-up between No. 1 Meeker II and No. 9 Rehab Services of Craig, and No. 4 Big Kahuna Coins and No. 5 Rangely.
The tournament, which is single-elimination, continued this week.
With solid batting and two standout pitching performances, No. 1 Meeker II ousted No. 9 Rehab Services of Craig, 13-0, on Wednesday night at Woodbury Sports Complex.
While a lot of Meeker II players got hits on the night, Garrett Frantz, 10, was able to get two key singles in the second and fourth innings to keep his team on top.
“I just watch the ball as it comes in,” Garrett said. “It’s like it comes in slow motion.”
Garrett was able to help out in the field, playing first base and shortstop in the shut out.
Chris Scherbarth, 8, pitched the first three innings, allowing no runs and striking out several Rehab Services batters.
David and Sandy Scherbarth coached Meeker II to victory by focusing on the fundamentals.
“We have been working on the basics all year,” David said. “Each week we improved and were able to fix our mistakes.”
About a third of the team returned from last year’s team, and the experience has been noticeable, Sandy said, but keeping the kids motivated and involved in the game is a task.
“As coaches, we have to talk to them and remind them what is going on in the game,” Sandy said. “We ask them how many outs, where the play is, and stuff like that.”
Meeker, 8-2 in league games, including the playoffs will play in the championship game at 6 p.m. today in Craig.

— Courtesy of the Craig Daily Press

Driver Safety Program to be held in March

Listen to this post MEEKER | The AARP Driver’s Safety Program will be held March 22 and 23 from 1-5 p.m. each day at Mountain Valley Bank in the back room. The program consists of […]

Listen to this post RBC I Rio Blanco County Coroner Dr. Albert Krueger said “a gunshot wound to the abdomen” caused the accidental death of James “Jeb” Berthelson, 32, of Meeker.

Letter: Fourth of July is a religious holiday too

Listen to this post I am not sorry the birth of our nation, the United States of America, has fallen on a Sunday every seven years. America is 234 years old, so the Fourth of […]