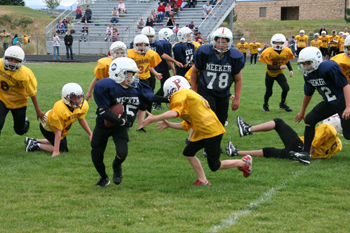 Meeker’s Sheridan Harvey skirts right against Parachute last weekend as the Mustangs swept their opponents. In the fifth- and sixth-grade game, Meeker downed Parachute 27-12, behind the running of Harvey, who rushed for more than 150 yards, scored three times and added a PAT. Quarterback T.J. Shelton also scored on a 98-yard run for the Mustangs.  Meeker’s offensive line of Cole Brown, Austin Bradford, Jake Smith, Kash Atwood, Jacob Nielsen, Tyler Ilgen and Tommy Chitwood opened big holes for Harvey, Shelton and Jacob Henderson. The Meeker third- and fourth-graders used their speed to defeat a larger Parachute squad — both in numbers and size — by a score of 40-22. Doak Mantle rushed for more than 250 yards and scored five touchdowns to lead the younger Mustangs. The Meeker runningback also added three PATs. Logan Hughes added a sixth touchdown for Meeker. Megan Shelton — one of three girls on the Meeker team, a first — had a sack for the Mustangs.

Listen to this post MEEKER I After the Grand Valley Cardinals canceled their dual meet against the Cowboys, the Meeker wrestling team scrambled to get more competition before the state-qualifying regional tournament and found it […]