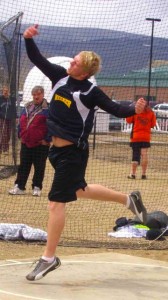 Both teams placed third overall and the guys were just one point shy of placing second.
Standout sprinter Marki Cook and speedster Timbre Shriver did not compete due to injuries. Paonia claimed both titles with a superior number of athletes.
To be all-conference in track, one must place first in an individual event.
Johnny Wix was the first athlete of the day to make all-conference by winning the shot put. Colton Brown followed with a personal best and qualified for state in the high jump going 6-2.
Kathryn Doll made all-conference in three events, winning the triple jump and qualifying for state again going 34-1/4, she also won the 100-meter dash and the long jump leaping 15-9 1/4. Brock Campbell won the 800-meter run in a personal best of 2:04 for all-conference honors.
The boys’ 4×800-meter relay team of Terrence Casias, Pat Love, Jared Frantz and Brock Campbell got the day started in the running events with a season best time of 8:54 to place second.
The girls’ medley relay team of Gabie Goettel, Meg Nieslanik, Janae Kindall and Annie Cook placed fourth.
Randia Rule took third in the 100-meter hurdles and teammate Mandi Corneliua placed sixth. Kathryn Doll won the 100 dash with Toby Casias going 11.8 for third and Jake Nieslanik taking seventh for the guys.
Adrienne Wix, Randia Rule, Gabie Goettel and Krystal Otwell ran the 4×200 placing sixth, and the boys’ quad of Terrence Casias, Jared Frantz, Colton Brown and Toby Casias ran a season best and just lost to a good Soroco team for third place.
The girls’ 4×100 sprint relay team of Adrienne Wix, Randia Rule and Janae Kindall survived bad handoffs, but anchor Kathryn Doll ran down two girls and took first. Terrence Casias, Bubba Mazzola, Jake Nieslanik and Toby Casias ran a season best 4×100, placing third with the top three teams close together.
Jared Frantz placed fifth in a strong 400-meter dash field, and Krystal Otwell and Adia Comeau ran some of their best times of the year. Campbell won the 800 with Terrence Casias close behind for fifth place. Mandi Cornelius ran a personal best in the 300-meter hurdles for third place.
In the 200-meter dash freshman Adrienne Wix placed sixth and classmate Toby Casias took third for the boys running 23.8, Pat Love was 10th overall and Logan Sanderson had a personal record.
In the last event of the day, the 4×400, the girls’ foursome of Mandi Cornelius, Adia Comeau, Krystal Otwell and Annie Cook placed fourth and Jake Nieslanik, Brock Campbell, Brian Crowe and Pat Love placed third.
The Meeker athletes competed very well in the field events; Janae Kindall placed sixth in the discus with Johnny Wix second and Caleb Ball seventh for the guys. Wix won the shot put with Bubba Mazzola taking fourth in a personal record (PR) and Ryan Wix fifth also a PR — the three boys scored 19 points in that event.
The girls’ triple jump trio of Kathryn Doll (first) Meg Nieslanik (third) and Adrienne Wix (seventh) scored 18 points in their event.
Doll also won the long jump, and Janae Kindall had some nice jumps and placed fifth, Brian Crow went more than 19-0 to place third for the boys.
Crowe also triple jumped to eighth place. Colton Brown won the high jump, and Meg Nieslanik just missed 4-8 for seventh place. Sophomore Chanler May placed sixth in the shot put.
The Cowboys will travel to Grand Junction this week to compete in the regional track meet at Stoker Stadium.

Freshman standout Kathryn Doll saved her best for the most important meet of the season.

MEEKER — After a Northwest League loss to Hayden and a league win against Rangely, the Lady Cowboy basketball team could finish the regular season in a three-way tie for first place, with a win […]