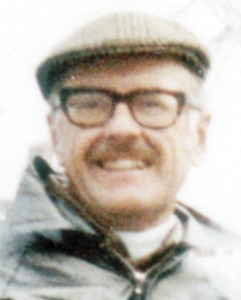 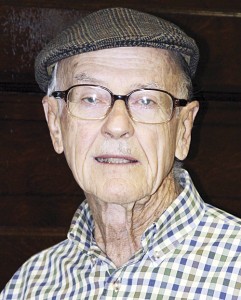 MEEKER I From the record-setting 100-yard dash in 1945 to his extensive family history in the area, Harold Ball’s story is an interesting one. He ran a 10.1 second 100-yard dash in Rifle his senior year. He was unsure about the composition of the track surface but is certain it was faster then the Meeker track at that time. Track meets in Meeker at that time were held on the horse track at the fairgrounds. Harold went on to run track for Colorado University. His 100-yard dash record will stand forever, now that track events are measured in meters.
Harold was born in Salt Lake City, Utah, to Wright O. Ball and Marguerite G. Lunny. His grandfather was Ruben S. Ball and Ruben’s half sister was Susan C. Wright, who came to Meeker in March 1883. Susan opened the first hotel in Meeker. She fell ill in 1892 and called Ruben to come back to run the hotel for her. She passed away in 1893, leaving the hotel, the lot and $8,000 in debt. Susan was originally from North Carolina and wished to be buried there, but it was winter in Colorado so Ruben built a cover, and kept his promise when the snow melted.
In 1896 the east and west wings of the hotel were added. The hotel was sold in 1928. The Great Depression hit in 1929 and the people running the hotel couldn’t keep it, so they called Wright Ball, Harold’s dad, who had moved with the family to Long Beach, Calif., to run the hotel again.
Wright came back to Meeker in 1932, planning to move his family back in May 1933. A terrible 6.3 earthquake hit Long Beach on March 10, 1933, and two weeks later Wright managed to get his family safely to Meeker.
Harold vividly recalls the quake. “It was a roar, and women were screaming and trying to run but a shock would come and they couldn’t go anywhere.“ He added, “You could see the sidewalk moving with the shock.“ The damage from the quake was substantial and many people were left without a place to stay.
In a strange coincidence, Freeman Fairfield lived in a mansion in Long Beach and many people stayed there following the disaster. Harold remembers sleeping in the car outside the mansion.
The Ball family ran the hotel for four years, selling it to Paul Dunn in 1936, who added the café. The story is that he bought the café for his daughter when she got married. Wright became the postmaster after the hotel sold and worked there until he became sick.
Harold refers to the maternal side of his family as the Irish side. His grandfather was Owen H. Lunny. There were about 16 kids in the family and three of the siblings came to Leadville to work in the mines. Harold’s grandfather and his friend Mr. Murray homesteaded what is now the Irish Mesa. Two Irishmen, hence the name. Owen would hire help and have them homestead land and then buy the land from them, enabling him to acquire more land. There is a reservoir in the Jensen Wildlife Area up Coal Creek near where he homesteaded named Lunny Reservoir as well as a mountain called Lunny Mountain
Harold was 6-1/2 years old when his family arrived in Meeker. He had to start the first grade over because they left California in March. He attended grade school in the old school where the Sixth Street field is now. That building was condemned when he was in sixth grade. He attended sixth through the eighth grade in the old elementary school and was graduated from high school in 1945. The high school then was in the building used as the administration building now. He attended college in Boulder where he majored in architectural engineering. He received a job with what was then called the Colorado Department of Highways. He worked there for 32 years, beginning in Meeker working on Highway 64. He walked the trip from Meeker to Rangely several times before the road was finally completed. After the completion of Highway 64 he was moved to Steamboat where he was involved in projects like the preliminary work and construction of Rabbit Ears pass, the highway from Granby to Grand Lakes, I-70 east and west from Vail and relocating the center line through the canyon for construction. Harold retired in 1982 and has since enjoyed a trip through Europe and other travels.
Harold, 86, said, “I don’t look back on the time and wish I had done this or that.” He talked about how quickly the time has passed, remembering many details of his history as though they happened yesterday, like the music his mother played on the piano, and the time he spent with his brother. Perhaps it has been Harold’s attention to detail and appreciation for the collaboration of that detail that has contributed to his longevity and success in his life. Whatever his secret, he has lived longer than many and run faster then anyone in town for nearly 70 years.

Listen to this post CRAIG I On Sunday at approximately 7:29 p.m., Colorado State Patrol troopers were dispatched to a single-vehicle accident on Moffat County Road 7, near Milepost 7. A former Meeker man, Hunter […]

Listen to this post MEEKER I The Cowboys will open the 2009 season Friday night against the Basalt Longhorns at Starbuck Stadium.