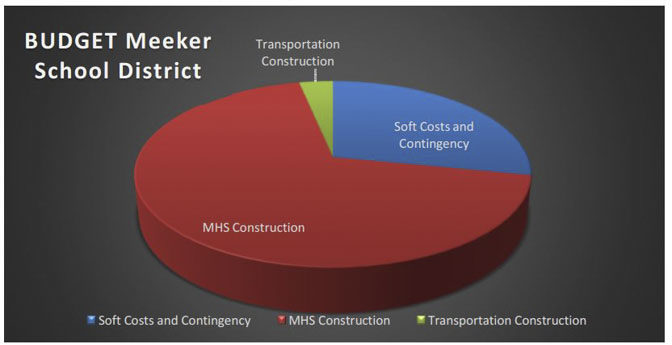 MEEKER | The primary emphasis of the April 8 meeting of the Meeker School Board was an update on the new High School and bus garage construction projects.

“Over spring break, we were able to clear out the south area of the school,” John Usery, a member of the project management team, reported. “The abatement contractors are in there currently. They were able to strip out the flooring, which contained low levels of mercury and were able to transition over to the auxiliary gym. We’re on schedule and on budget.”

Abatement also addresses the presence of asbestos, which exists in some of the drywall compound.

Because of the soil on site and other factors, a major decision by the engineering team was to select “rammed aggregate piers” for the foundation system. This ground improvement technique constructs dense columns of compacted stone by first pre-drilling  numerous holes into the soil and then lifting and tamping the aggregates (gravel) into each hole using a vibrating probe until it is completely filled.

Also discussed was the possibility of renewable energy sources for the new building. “The first option for that would be tapping into an already existing infrastructure,” Superintendent Chris Selle said. “The second best option would be to build our own solar field. The most expensive and highest maintenance option is to put solar panels on the roof.” The latter option would have to be decided now because it would change specifications for the building itself.

Discussion then turned to the transportation construction (i.e., bus garage), which some Meeker residents have mistakenly thought had been dropped. It has simply been postponed and will probably be built on the existing site.

There was also brief mention of the possibility of a stadium upgrade, which would include: restrooms, pole vault area, bleachers, asphalt, entrance way and “everything else,” Selle noted. This would be a totally separate project with an approximately $1.1 million price tag.

The budget for both the high school and bus garage is $45,617,982. $12,816,231 of this is “soft costs and contingency,” which are comprised of: architectural, engineering and interior design fees; civil engineering costs; permits; testing and inspection; project manager fees; and legal fees. $31,301,750 of the budget (“hard costs”) is for the actual construction. Finally, the budget for the bus garage is $1.5 million.

By DOC WATSON | Special to the Herald Times