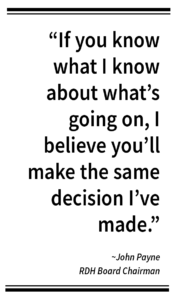 RANGELY | More than 20 residents of Rangely were in attendance at the most recent Rangely District Hospital board meeting on July 26. As anticipated, the topic of the proposed mill levy was opened to the public. In a previous meeting, the hospital board had proposed a request for an increased mill levy of somewhere between 12.5 and 20 mills. The hospital district currently receives 20.99 mills.

ty. The rate of this tax is expressed in mills. One mill is equal to $1 for every $1,000 of assessed value.

There were several vocal opponents of the proposed mill levy in the group, as well as a number in support of the proposal. As a w

hole, everyone who spoke expressed support for the hospital and its staff, but several shared their concerns about the mill levy proposal as it has been presented and whether voters will approve it.

As with all mill levies, the amount of money collected varies with property value assessments.  The current mill levy brought in more than $2 million in 2010, but only collected $1.2 million last year due to the decline in property values. If property values increase in the near future, the revenue the mill levy generates will increase.

People from the audience voiced a concern that the proposal was “open-ended” with no caps on the amount of money that could be generated. If assessed property values in Rangely climb rapidly as they have done on numerous occasions in the past, the amount of money the mill levy would generate could theoretically exceed what the hospital actually requires to operate. Board Chairman John Payne went on to say that a number of options are being considered, however, he does not believe the hospital can survive without some kind of increase in the mill levy.

“The hospital needs it [the mill levy] to exist the way it is right now,” Payne said. “We’ve concluded this is what we think we have to do. We’ve explored a lot of the options that we thought we could have, and this is the best option we’ve come up with in the sense that we don’t see a path away from having to go to the voters.”

Hospital board chairman John Payne stated clearly that the board only wants to take what is needed to keep the hospital afloat and prevent the discontinuation of services or a further reduction in staff.

The subject of budget cuts was also discussed but according to hospital executives, a great deal of this has already taken place and the hospital is trying to avoid cutting any deeper.  Chief Nursing Officer Sharma Vaughn, who has resigned, pointed out she has already reduced her nursing staff by a third.

Additional regulations and threatened cuts coming from the state or the federal government could force the hospital into further financial difficulty, and uncertainty about the oil and gas industry in Colorado adds to fears about future funding from property tax revenue.

According to CEO Nick Goshe, who has also resigned, the hospital receives approximately $8 million annually in state and federal funding. That money—set aside for “Critical Access Facility” operations—cannot be applied to the pharmacy, the clinic, home health, assisted living.

“We get a lot of money from Medicare to offer an ER with in-patient bed capability and the EMS, and that’s it. The cuts will have to come from other areas,” Goshe said. Additionally, he stated, the board and administration has been told the 6-year-old facility will need to begin updating equipment and maintaining the building at a cost of about $1 million a year.

Payne said the board is deeply concerned about making sure the public has all the facts they need to make an intelligent decision when it comes to a vote.

“If you know what I know about what’s going on, I believe you’ll make the same decision I’ve made,” Payne said.

The board has until September to define the terms of the ballot measure that will be voted on in November.

The district has prepared a 30-minute informational presentation which can be seen in its entirety at tiny.cc/rdh.