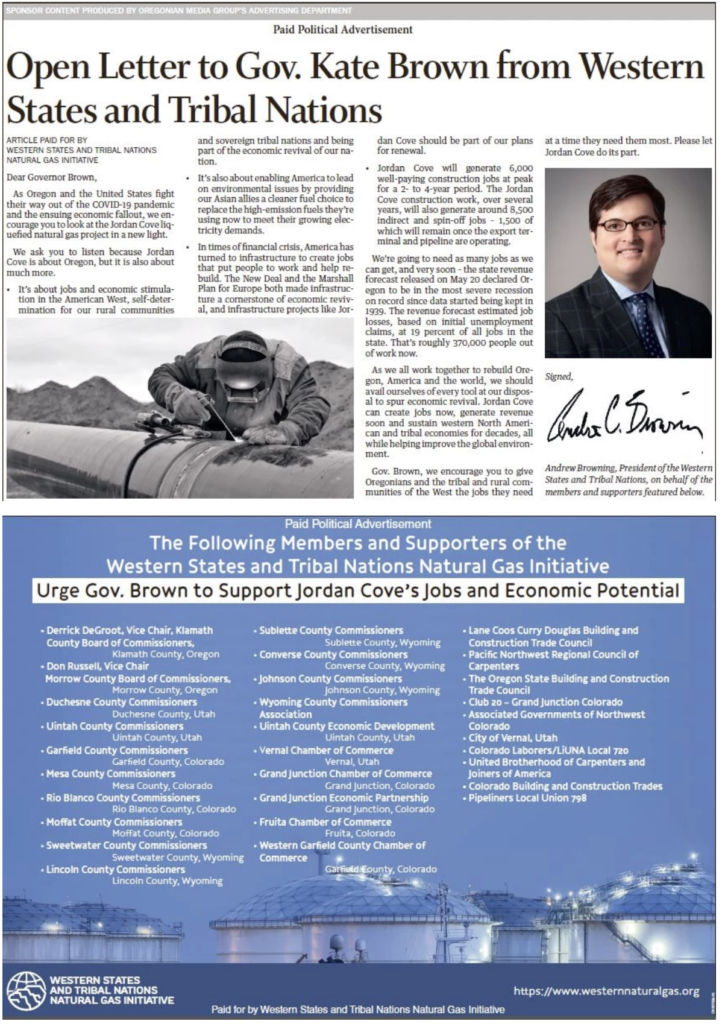 The Western States and Tribal Nations natural gas initiative, which includes representation from multiple states, counties and industry groups, including Rio Blanco, paid for a sponsored full page ad in the Sunday Oregonian newspaper with a letter to Governor Kate Brown about how the pipeline will help Oregon recover from the economic impact of the pandemic.
Rio Blanco County Commissioner Jeff Rector has been a vocal member of the initiative.
Oregon’s Coos Bay/Jordan Cove would be the site of a proposed liquified natural gas terminal and 229-mile Pacific Connector Pipeline that would transport liquefied natural gas (LNG) from western Colorado, Wyoming, Utah and New Mexico to the Pacific coast for export to Asian nations.
Opponents to the plan have expressed concerns about harm to wildlife, sacred tribal lands, private property rights impacted by the pipeline’s course, as well as other objections from the state of Oregon.
As of May 22, the Federal Energy Regulatory Commission has refused to revisit its decision to approve the project, which they have declared as being “in the public interest.”
If approved and constructed, the project would provide a new market for natural gas in the Piceance Basin.
Western States and Tribal Nations has also been in talks with Baja California, as an alternate location for the west coast LNG terminal.

RBC | Farmington, a city of 45,000 in the northwestern corner of New Mexico, has run on a fossil fuel economy for a century. It is one of the only places on the planet where […]

RBC I The Environmental Protection Agency proposed last week to reduce emissions of methane from the oil and gas industry across the country, targeting new wells and equipment but also providing guidelines for existing wells […]