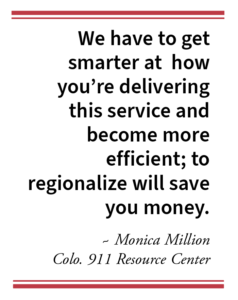 RBC | Rio Blanco County Commissioners listened to concerns about the future of the county’s emergency communications system during a work session on Tuesday, Oct. 15 in Rangely.

Next Generation 911 refers to an initiative aimed at updating the 911 service infrastructure in the United States and Canada to improve public emergency communications services in a growingly wireless mobile society. Communications Supervisor Mike Cook said the county is at a crossroads with 911 before introducing Monica Million, executive director of the Colorado 911 Resource Center.

“This isn’t ‘will you participate in this,’ it is this is the way Colorado and the United States are going,” Cook said. Earlier this year changes were made in pricing and the 911 board was paying $4,000 a year. That will change to $9,000 per line. Rio Blanco County and Rangely will be required to have a minimum of two lines going forward. “We are looking at $14,000 to $18,000 per year.”

Million reported that several states have already migrated from the copper wire in the ground infrastructure to an IP based network. In Colorado there are still two areas that have 1970s technology which has problems delivering 911 services. “You will have to transition,” Million said, and the cost will increase exponentially.

Currently there are two separate 911 authority boards within Rio Blanco County: eastern and western. Having two boards is not cost effective; it is more efficient to just have one, Million told the commissioners. “You have the authority to undo them.”

Because of the growing cost of emergency communications many areas are regionalizing services and sharing the cost. She noted successes in places like Weld County, where several community’s emergency services are dispatched by one regional center.  “We have to get smarter at how you’re delivering this service and become more efficient; to regionalize will save you money. It is the fiscally responsible thing to do for your taxpayers,” she said.

Cook reported that his past discussions with the Western Rio Blanco 911 Authority Board had been unproductive because Rangely prefers to keep their emergency services local. In eastern Rio Blanco County, the 911 surcharge has gone from 70 cents to $1.80. Cook said he has offered to help Rangely. Commissioner Moyer suggested that Cook and Million get on the Rangely Town Board of Trustees meeting agenda to speak with them regarding the changes and time constraints.

“I can imagine Rangely will be looking at a quarter of a million dollars to upgrade their communication system,” Million said. “It’s about how can we best spend our money.”

According to Cook and Million, this is just the start. It will continue to get more expensive. “When you start talking about the basic 911 tariff price going up five to six times the current cost, some of our smaller communities are facing some hard fiscal times. A lot of these communities do not have that kind of money to sustain that kind of cost increase.”

RBC | Rio Blanco County Commissioners revisited an unresolved problem with flooding on the properties surrounding the Meeker Airport Monday. Since the airport update was completed, property owners below the airport have reported repeated trouble with […]

RBC | What started as a typical county commissioners’ meeting with newly elected Commissioner Gary Moyer, returning Commissioner Si Woodruff and newly appointed Board Chair Jeff Rector at the helm, turned into something of an […]

RBC I The 2012 budget for Rio Blanco County was presented to commissioners Monday by budget/finance director Chris Singleton.