RANGELY — While Dwayne Newman may be moving to a different part of the state, he is familiar with the area.

Newman, who resigned in January as superintendent of the Rangely School District for personal reasons, has accepted a superintendent’s job in Monte Vista, in south-central Colorado. 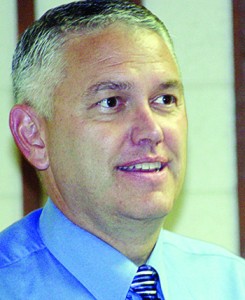 “It’s about 17 miles west of Alamosa, in the San Luis Valley,” Newman said. “I’ve been down there quite a bit for vacations, and I’ve been to Adams State College (in Alamosa) for some continuing ed and conferences, things like that.”
Newman, who will stay on as superintendent in Rangely through the end of June, said the Monte Vista School District has a higher enrollment, but it is also in a more impoverished area.
“It’s about twice the size of Rangely, numbers-wise,” Newman said. “But the number of students who receive free and reduced lunches is quite a bit higher there. That valley is a farming valley, so there are a lot of folks there who are involved in the labor end of that, and farm labor pays pretty low.”
Monte Vista has also a more ethnically diverse population.
“There’s a lot of history in that valley,” Newman said. “A lot of the natives were folks who moved in from Spain, through Mexico. There are a lot of Hispanic families, as well as quite a few families of Japanese descent.”
Newman served as principal of Meeker High School for five years, before moving to the west end of the county and taking over as superintendent of the the Rangely School District at the start of the current school year.
“I think we’ve taken the district a good way down the path of really focusing on achieving its mission, which is to be the best school district in the state,” Newman said. “We’ve defined what that means, and what that looks like for our students, what it looks like instructionally.”
The district is headed in the right direction, Newman said, despite experiencing financial challenges. Faced with a projected $500,000 to $700,000 budget shortfall, school board members last week voted to close Parkview Elementary School, as a cost-savings step, and to move grade-school classes to the middle school building.
Still, Newman said he was proud of what the district has accomplished, and how it has responded to the current budget crisis.
“I was really pleased we got the ($15 million) bond issue passed, and even though it has been uncomfortable and difficult, the district has done the right thing with closing the elementary school,” Newman said. “It will be better long term for the kids, and it will allow the district to spend within its yearly budget, instead of spending down its reserves.”
Newman said he has enjoyed his time in Rangely, and he looked forward to following the district’s progress.
“The staff has been great and has worked really hard to start down the path of becoming the best district in the state,” Newman said. “They’ve been very reasonable about the necessity of closing the (elementary school) building and moving on. They just focus on kids here. We don’t have the argument about this issue of that issue, we have conversations about what we need to do for kids.
“I’ve enjoyed my time here,” Newman continued. “The people I have met have been very nice folks. The board has been a great board to work with. They really want to prepare the district for the future. Once they get a new superintendent on board, they will just continue on. I will look forward to watching the progress they make.”

Listen to this post RANGELY — The Rangely Arts Council will host a Fourth of July Art Show and Fair at Kenney Reservoir prior to the fireworks.

Listen to this post RANGELY | Miss Merridy Ellen Maybury and Mr. Cody Ray Abbott were united in marriage on Saturday, Aug. 8 at 6 p.m.