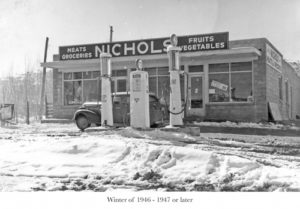 RBC I Meeker and Rangely history can’t go back much farther then Fred Nichols, the grandfather of Nancy Sullivan.
Nichols’ father, Ben, joined the Union Army a week before his 16th birthday and fought in the Civil War. After he was discharged, he married Anna Marie Von Kennel in 1874 and took his wife west. Fred Nichols was born April 28, 1884, in North Park with Mrs. Louis Allen as a midwife.
Soon after Fred’s birth, his parents came to Meeker in a covered wagon with the Allen family. They lived in a cabin on Flag Creek and then traded their ranch to David Smith for his Powell Park ranch, and then traded that property for some work horses. When they moved into Meeker, Ben Nichols built a log building where the lumberyard used to be. They traded that for a house across the street that is in still in the family.
Nancy Sullivan currently lives in that house and through the years they have added on for their family. In fact, Fred Nichols moved back into the house when he was 95-years-old. He lived with Pat and Nancy Sullivan for eight years before passing away at the age of 103. Everyone who knew him well called him “Dad Nichols,” and the stories he told were amazing.
“We were always close and I loved having him live with us,” Nancy said.
Fred remembered his first years of school in 1891 being in a brick building where the original football field was. He vividly recalled the attempted bank robbery of 1896. His father actually shot one of the bank robbers. Fred even remembered the type of gun his father used. He recalled details as to what prevented the bandits from getting away, like delaying to pick up new guns and ammunition. He remembered being in school and out at recess during the shooting and wondering what was going on. The kids rushed down after school to see one man still laying in the street alive, and the others in a ditch.
In 1901, Fred had completed as much schooling as possible at the time as there was not a high school. Mr. Clark taught two years of high school classes, so Fred finished the tenth grade. He went to work for Ambrose Oldland in the general store of A. Oldland and Company. In January 1904, he moved to Rangely to be in charge of the country store owned by H. Coltharp. Two years later he moved to Ely, Nev., to run Mr. Coltharp’s store there, but he only stayed about a year and a half. He was partners in the store in Rangely until 1924 before buying the entire interest in the store and running it until 1963. He officially changed the name of the store to Nichols Store in 1947.
Because of bad roads, a trip to Meeker took a day and a half with a team and wagon, Fred recalled. He got his first car in 1920 which shortened the trip to only four hours for the 60 miles. He saw great technology in the oil field as well, like the length of time it took to get a rig built and then he said it would take years to get down 2,000 feet. Fred saw the ups and downs of the oil boom and busts and the businesses that came and went with them. His business was one that stood the test of time thanks to a strong business sense and the sheer determination to make a living.
Fred passed down his business sense as well as a love for horses. His son, Reg Nichols, was a jockey for a time and then started his business in Meeker, originally where the WREA is today, then across the street in the current Ducey’s Electric building, and then to the location where it remained through three generations, in the current Northwest Auto building. Nancy did the books for the company for nearly 30 years. She also attributes her “horseaholic” behaviors to previous generations. The Nichols family has incredible history, perseverance and kindness in helping others. So much history in fact, a follow up story with Nancy Sullivan and her cousin Sally Wilson will follow, sharing more recent history and additional stories.

Listen to this post Dear Editor: I want to pass on some encouraging news for the staff at the Herald Times.

Listen to this post RBC | The Meeker Lions Club and Rangely Elks Club will be hosting their annual Easter egg hunts this Saturday. The Meeker hunt will be at Barone Middle School beginning at […]

Listen to this post MEEKER I In an E-Newsletter to “Friends” last week, Colorado U.S. Senator Cory Gardner (RYuma) reported that he’d been in northwest Colorado during his Fourth of July in-state work week and […]