RANGELY | Gage Prater, 9, is a third grader at Rangely’s Parkview Elementary School. A happy kid who enjoys school, loves to play football, wrestle, play with his friends, and ride his dirt bike, Gage’s life was rocked by the diagnosis of a rare brain condition last month.

Gage woke screaming in the middle of the night on Oct. 22. When his parents, Brian and Marcia Prater, got to his bedroom he was on the floor screaming, holding his head and vomiting. Within a few minutes Gage’s little body went lifeless and unresponsive. The Praters live in the county, so they called 911, and rather than wait for an ambulance, they rushed him to the emergency room at Rangely Community Medical Health and Wellness Center. After a CT scan determined that Gage had blood on his brain, arrangements were made and he was flown to Primary Children’s Hospital in Salt Lake City, Utah.

Just over an hour after arriving Gage was diagnosed with a brain arteriovenous malformation (AVM) which is a tangle of abnormal blood vessels connecting arteries and veins in the brain. The arteries are responsible for taking oxygen-rich blood from the heart to the brain. Veins carry the oxygen-depleted blood back to the lungs and heart. A brain AVM disrupts this vital process. An arteriovenous malformation can develop anywhere in your body but in Gage’s case it developed in his brain. Brain AVMs are rare and affect less than 1% of the population. A brain arteriovenous malformation may not cause any signs or symptoms until the AVM ruptures, resulting in bleeding in the brain (hemorrhage). In about half of all brain AVMs, hemorrhage is the first sign. 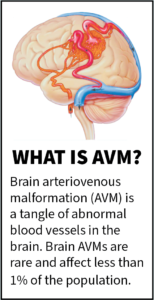 While at Primary Children’s Hospital Gage underwent several surgeries. One of the surgeries placed a drain tube in his brain and another removed the AVM. Gage and his family spent three weeks in the hospital. After improving considerably from the time he had arrived, Gage was allowed to return home on Nov. 11. Marcia says he is recovering well but it is going to be a long recovery and he won’t be able to return to school for a while.

The Praters are the owners of Prater’s Plumbing and Heating and Five Grow LLC in Rangely. Gage is the grandson of Mark and Pam Berrett and Milton and Karen Prater, both of Rangely, and the brother of Jessy Powell, Kierra Powell, Bryce Prater and Harleigh Prater.

The Praters have humbly declined having any medical fund set up on their behalf. They did however, want to say thanks for all of the prayers and support. They would like to thank their community, friends, Rangely Police Department, Rangely District Hospital/Rangely Community Medical Health and Wellness Center, Primary Children’s Hospital, Parkview Elementary, Dino Dispensary in Dinosaur, Colorado, Carrie Swails, and Gage’s third grade class and parents. They also would like to thank Rangely Youth Football, the Elam and Hamblin families, their family, Colo CPA, and their employees for running and taking care of their businesses while they were away.  They apologize if they missed anyone but added that they are extremely grateful for such a wonderful community.

Listen to this post RBC I Meeker’s sheep men have trailed through town on their way to the Utah desert for the winter, with fewer numbers than in the past. The industry has declined over […]

Listen to this post RANGELY I An earthquake in Rangely Saturday registered 3.7 on the Richter scale. According to the United States Geological Survey (USGS) the epicenter of the light quake was 2.5 miles northwest […]