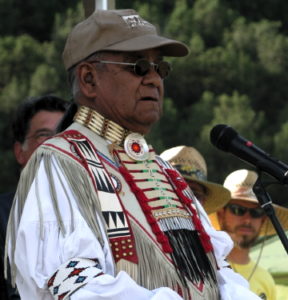 On May 21, Duncan will give a presentation at 7 p.m. at the Meeker Recreation Center’s community room, which is open to the public. Earlier in the day, he will make two presentations at the elementary school — at 10 a.m. and 1 p.m.
Duncan, 76, shares “campfire” stories about nature as well as history of the Utes.
Duncan tries to plant the seeds of curiosity and appreciation to enable youth to become more aware and mindful of nature. He will wear traditional Northern Ute regalia and describe the details and purposes of the various pieces of his attire. He will include flute and drum music with his presentation.
His stories will be interwoven with culture, philosophy, history, apparel and arts of the Utes, as well with words from the nearly extinct Ute language. This program is designed, not only to share these stories, but to open young people’s minds about nature and animals in such a way as to understand, respect and have a greater appreciation of Colorado’s natural and cultural heritage.
Duncan was born into a family of traditional ceremony people. He has been the historian of the Ute Tribe as well as a consultant with the tribe and outside sources. During the past 40 years, Duncan has conducted an infinite number of lectures, discussions and ceremonies in Colorado universities, schools, museums and civic groups statewide. Duncan was the grand marshal at the 2002 Olympics opening ceremonies in Salt Lake City. Duncan is consultant to Bureau of Land Management and USFS with regards to cultural rights, sacred sites and native objects discovered in Colorado. He has worked with the Dalai Lama on sacred ceremonies. Duncan has been called upon many times as the recognized representative of the traditional aspect of the Ute tribes in state and national events, including a presidential inauguration.

MEEKER I Colorado’s gift to the nation will leave Meeker for Washington, D.C., on Tuesday, Nov. 6, and the aboriginal peoples of this land — known today as the Utes of the Uintah and Ouray […]