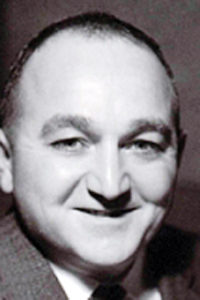 Raphael “Flash” Caloia, 89, of Hobe Sound, Fla., and Lakeland, passed away peacefully Sept. 29, 2012, after a short illness.
Raphael was born in Old Forge, Pa., and moved to Syracuse, N.Y., after his high school graduation. During WWII, he served in the Merchant Marines. In 1951, he opened Raphael’s Restaurant, which he operated for more than 50 years. When he wasn’t working at the restaurant, Flash could be found at the bowling alley. Another favorite pastime was playing the organ. Flash was an avid golfer with more than 10 holes-in-one to his credit. He spent summers in Erieville at his camp on Tuscarora Lake.
He is survived by his wife of 59 years, the former Betty Jean Chapman; daughters Roxanne (Ronald) Balduzzi of Syracuse, Sherry Caloia (Dr. Gerald Tomasso) of Glenwood Springs, Colo., Candie (Allen) Deming of Baltimore, Md., Penny (John) Mercer of Syracuse and Jennifer Caloia (Chris Klein) of Morrisville; a son, Raphael II (Dorothy) of York, Pa.; his sister, Fay Borell; he was Papa to 12 grandchildren and six great-grandchildren. He is also survived by numerous nieces, nephews and cousins.
In lieu of flowers, contributions may be made in his memory to Upstate Cancer Center, 750 E. Adams St., Syracuse, N.Y., 13210. Online condolences may be offered at www.bagozzitwins.com

Listen to this post Marlin George passed away peacefully on Monday, July 18, 2016, at St. Mary’s Hospital surrounded by his family. Marlin was born in Rifle, Colo., to Alfred and Bertha George. He was […]

Listen to this post Clem John Clark, son of Roger B. and Janet M. Clark, was born at Pioneers Hospital on March 9, 1985. For 25 years he fought a never-ending battle with cystic fibrosis […]