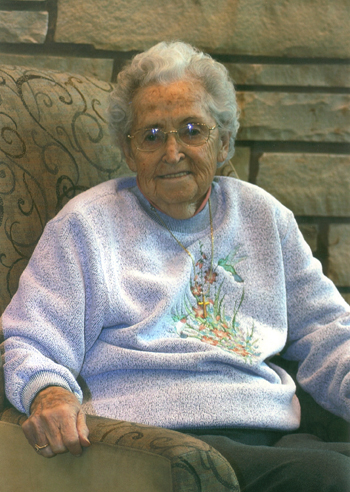 Mable J. Banta, a longtime resident of Rangely, died peacefully at her home, The Oaks, in Fruita, on Saturday, May 22, 2010.
Born in a rural area around Las Animas, Colo., on March 18, 1920, to William and Carrie Davis, the Davis family owned a cattle ranch. The family had one of the only radios in the area and often hosted barn dances on Saturday nights. When her dad sold the family buggy and horse team, Mable remembered hating the newly purchased car and opting to ride on the fender rather than on the seat. Soon after the dust storms of the 1930s, the family sold the cattle ranch and moved to Las Animas. Mable finished school and attended beauty school, later opening her own beauty salon at the age of 19. Mable married her high school sweetheart, Clair B. Banta, in 1940. They moved to California in 1942, where Clair welded in the shipyards during the war. Mable also supported the war effort, joining the ranks of illustrious women known as “Rosie the Riveters.” Their first child, Charleen, was born in 1944 and the small family moved to Rangely in 1946. Clair found work in the oil fields as one of the first Stanolind Oil Company employees. Their son, Derry, was born in 1948, completing their family. The family later spent five years in Riverton and Elk Mountain, Wyo., but moved back to Rangely in 1960 to purchase the Trail Canyon Hunting Lodge. The family ran the hunting lodge for many years and Mable enjoyed being outdoors, hunting and cooking for the ravenous hunters. Mable retired as an X-ray technician from the Rangely District Hospital in 1985 after 25 years. Rangely was home to Mable until she moved to The Oaks in Fruita in 2008.
Mable and Clair loved their family, loved the outdoors and loved their community. Community spirit has always been evident in Mable, as exemplified by her leadership in the Rangely Christian Church, the community food bank, the Rangely schools, 4-H activities, the PTA, Girl Scouts and Boy Scouts. Her generous spirit was honored in 1994 when she was chosen as the grand marshal for the Rangely School District homecoming. Mable was later chosen for the Rio Blanco Country Fair Book Dedication Award for her contribution to the fair and the community over the years. Mable was also an avid artist, having been introduced to oil painting in 1968 by Derry. With additional help and instruction from Dawna Wardell, Mable’s painting progressed rapidly. Mable’s wildlife and scenery paintings hang in many homes and businesses locally and in other parts of the country.
Mable leaves her daughter Charleen VonKrosigk and her husband Dean of Riverton, Wyo.; her son Derry Banta and his wife Diane of Grand Junction; six grandchildren; 16 great-grandchildren; one great great-granddaughter; and two more great great-grandchildren due later this year. Mable also leaves a nephew and his family in California. Mable was thankful each and every day for her family and her great lifelong friends.
The funeral service will be held at 2 p.m. on Saturday, June 19, 2010, at the Rangely Christian Church. Graveside services will be at the Rangely Cemetery following the funeral service and a dinner reception will be held at the church immediately after graveside services. Donations in Mable’s memory may be made to the Rangely Christian Church.
Arrangements by Rio Blanco Funeral Home of Rangely.

Meeker man shoots himself on Sept. 8

Listen to this post MEEKER I A 58-year-old local man was in critical condition last week at St. Mary’s Hospital in Grand Junction after what authorities believe was a self-inflicted gunshot wound in the stomach.