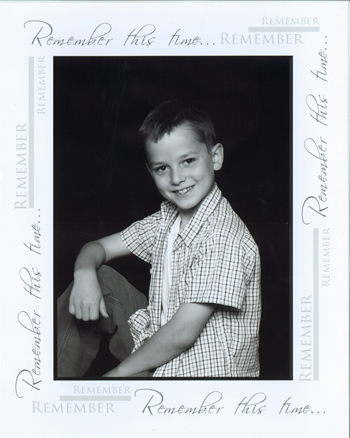 Stone Lee Martin was born into the hands of Paul and Vanessa Martin on April 21 at the dawn of this millennia. The only place he knew as home was Meeker, Colo. On Jan. 20, 2010, his spirit was received back into the hands of God, who gave it.
Stone’s favorite color was green. His eyes were brown. He loved rocks. He loved his dogs, Mocha and Penny, his hamster, Theodore, and his frog, Fred. He spent countless hours pretending with his sister, Alahna, playing Star Wars, Legos and video games. He was an avid reader and had a special fondness for the “Boxcar Children” series and “Diary of a Wimpy Kid.” His favorite teacher was mom, although he did like his four-grade teacher, Mr. Foreback, because he reminded him of dad. He cherished his friendships, of which he had many. He was a peacemaker. He was his sister’s protector and best friend. Nothing thrilled him more than to make people laugh. He could recite numerous passages from the Bible and would often rise early on Sunday mornings asking if he could call his friends to remind them of worship. His hugs could not be surpassed and neither could his compassion and love. Stone was what Christ desires us to become … a little child.
Stone is survived by his parents, Paul and Vanessa Martin of Meeker; his sister, Alahna; maternal grandparents, Benton Jr. and Susie Allen of Clinton, Ark; paternal grandparents, Jerry and Denise Martin of Cordova, Tenn.; maternal great-grandparents, Benton and Geraldine Allen, of Clinton, Ark., George Brown, of Pee Dee, Ark., and Mary Bramlett of Beebe, Ark; paternal great-grandfather, Bill Hardin of El Dorado, Ark.; and numerous uncles, aunts and cousins.
Stone was preceded in death by paternal great-grandparents, Bobbie Hardin, Marie Martin and Walter Martin.

Listen to this post William M. Herring, 90, of Longmont passed into the presence of Jesus on Tuesday, Feb. 16, 2016, surrounded by his wife and children.

Listen to this post MEEKER I Both of Meeker’s youth football teams won their games last weekend. The third- and fourth-grade team won its game in overtime, 12-6, against New Castle, while the fifth- and […]

Listen to this post RBC I The Meeker High School wrestling team will open the 2011 portion of the season tonight at home, with a dual against Coal Ridge, starting at 6 p.m., while the […]