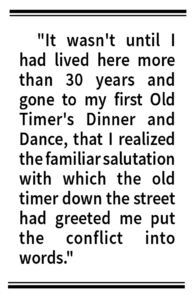 MEEKER | Moving to Meeker midwinter more than four decades ago, the cultural clash between my childhood hometown in the midwest and my new home in the west became a daily reminder. I was not only a newcomer but an obvious outsider to the community. It wasn’t until I had lived here more than 30 years and gone to my first Old Timer’s Dinner and Dance, that I realized the familiar salutation with which the old timer down the street had greeted me put that conflict into words.

A special education teacher by training, I could not find a job working in the schools that first year, so I found myself working part-time at the local weekly, The Meeker Herald. Jim and Leota Cook hired me to help get the paper to press each week. I soon learned that it involved stints in the darkroom, typesetting, cutting and pasting the individual articles and ads (before the paper became computerized) and eventually reporting. While I had a passion for creative writing, I had never been on the high school or college newspaper, so was a novice at writing news articles. My editors, K. James Cook and his son, R. James Cook, were rushing around trying to keep up with the energy development news, as the Piceance Basin was getting a lot of attention from the oil and gas industry,

When Big Jim would ask me after a county commissioner meeting if any decision of anything of importance had been made, I would often have to report that no business of any importance had been conducted during the meeting that I attended. This was before the passage of Colorado’s “Sunshine Law” so they did have casual conversations before their meetings, with much of the preliminary discussion conducted behind closed doors. My interest in stories featuring local people doing interesting things gave me the opportunity to write weekly features and allowed me to meet so many more people than I would have ever had the opportunity to meet on my own.

While making my rounds as a rookie reporter, I found myself in an unusual dilemma. Talking a mile a minute, with both hands flying, I never left much space. My lack of space between my words produced miles between theirs. The hustle and bustle of my speech often conveyed the wrong message. It appeared that I did not have time for the listener, as I was rushing to blurt the words out so that I could move on to something else.

I miss walking by my old neighbor’s house down the street and hear his familiar voice call out, “Hey Back East, how is it going today?” He passed on a while ago and didn’t know that I finally came up with the perfect retort, ” Hey Out West, it is going too fast.”

Where’s the fire?” one elderly gent asked me one day. No sounds of a siren, or rush of activity could be heard from the open windows of his quiet neighborhood.. It was only when he asked me if I could repeat the question, I realized that once again the rushed pace of my speech put a halt to the conversation.

I was one of the few walkers in the community, so when I passed anyone on my way to work or get the mail, their facial expressions never seemed to change. My friendly hellos were prompting a lot of unspoken goodbyes. It wasn’t until it dawned on me that my walking pace was even faster than the pace of my speech. I’d feel the brush-off instantly, as they continued to walk on.

I started out covering the meetings that no one else could cover that week: the school, county commissioner, or sanitation boards. I did not know shorthand and my nearly illegible scrawl turned into a mixed cursive print jumble that sometimes eluded deciphering later. Sometimes when I was sitting in a meeting or interviewing someone, I to jot down the salient points of a conversation, I would leave off many endings. A phone call from one irate local woman soon ended that method. Later on, when I would go out into the community and interview many of the descendants of the local pioneers each time I was reminded of my differences. It soon became obvious to them I was not raised in the west.

Listen to this post Dear Editor: After reading the article written by Ms. Patti Wiliams last week, I would like an opportunity to debunk her propaganda. The statements in her article were the most commonly […]

Listen to this post Though I was glad to finally see some closure to the Berthelson murder, I was quite disappointed in the sentence Neil Joy received. I’ve never really understood how a person can […]

Listen to this post I am writing to congratulate and thank the Tea Party movement for their phenomenal performance in the Colorado gubernatorial race. Due to their “toss-out-the-incumbent-no-matter-their-positions-on-issues-or-level-of-competence” demeanor and utterly disastrous organizational framework, they […]